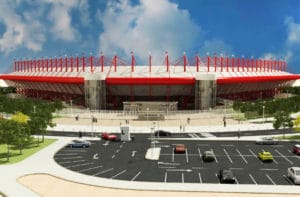 Located in the US border city of Ciudad Juárez, Mexico, the recently-completed Juárez Vive is a stunning sports stadium and a proud symbol of the recently-embattled city’s rejuvenation. Indeed, the bold, exposed angles of its support structure give one the impression that the stadium is rising into the air. When the baseball season got underway in April, the newly-completed stadium accommodated 12,000 fans for a thoroughly-modern game-day experience. An important component of that experience is now a highly-intelligible, pleasantly-musical sound reinforcement delivered by Danley Sound Labs loudspeakers and subwoofers, with support from Ashly amplifiers and Symetrix processing. The Mexican government had great expectations for the sound system’s performance, and the Clarity Incorporated-design not only exceeded those expectations, it did so on the narrowest of budgets. 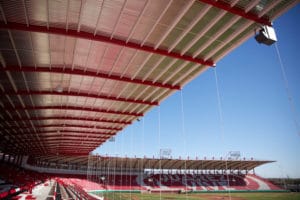 Ciudad Juárez’ strategic location in the context of Mexico’s drug wars threatened to smother the rich cultural life of its 1.3 million people, but things have turned around in recent years and the city is regaining its footing. The new stadium thus bears a level of personal investment from city and government officials that have influenced its design and construction. “The Governor of Chihuahua, César Duarte Jáquez, toured the construction site frequently to track and encourage the progress,” explained Rich Mason, president of North-Carolina-based Clarity Incorporated. “Our charge was to deliver ‘sound that was befitting the best of Mexico.’ They expected us to jump a very high bar.” The construction company, Afirma, only involved Clarity Incorporated after first determining that the original sound system designer wouldn’t be able to deliver that kind of performance on budget. As a result, Clarity Incorporated started the design three months late and operated on an emergency schedule. 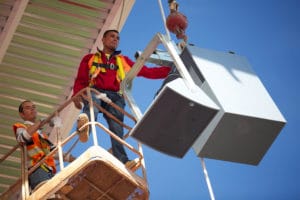 Bill Weir, Clarity Incorporated’s director of technology designed the system with assistance from Ivan Beaver, Danley Sound Labs’ chief engineer. A small crew from Clarity Incorporated spent three weeks on site to assist Afirma with the installation. “This is a value-engineered system,” asserted Weir. “Occasionally, you get a big-budget project in which issues can be overcome simply by throwing money at them. You don’t have to give them a lot of thought. But in this day and age, and especially for a government client, money is tight and you have to carefully balance the tradeoffs inherent in any decision, but in such a way that no one feels that it’s a compromise. That’s a value-engineered system.”

Loudspeaker and subwoofer placement at the new stadium looks deceptively simple. Nineteen Danley SM-80 full-range loudspeakers ring the lip of the roof that covers the stands, and every other SM-80 is joined by a Danley TH-118 subwoofer. “We’ve been huge fans of Danley from the very first moment we heard their loudspeakers,” said Mason. “Their phase coherence and pattern control are unrivaled, and they present the most natural sound stage I’ve ever heard short of studio monitors.” Weir, a loudspeaker designer himself, originally drew up the plans with a Danley SH-69 and a Danley SM-96 at each location. “I was able to quite nearly create an equilateral triangle between the slant of the seats and the point at which the loudspeakers would hang,” he said. “I wasn’t aware of the new SM-80, and so the SH-69 and SM-96 would combine to give me the appropriate coverage. Ivan realized the SM-80 would be as effective, but at a fraction of the cost, and suggested them as a replacement. I’ve worked with him enough to trust his recommendation on an unproven product. Sure enough, he was right. I’m blown away by the SM-80.”

Weir observed that subwoofers are often omitted from stadium designs. “With conventional subs, it’s hard to retain low end definition or clarity in a stadium situation,” he said. “It’s just mud. In contrast, Danley’s tapped-horn subwoofers have vastly lower group delay and a very definite focus that you can’t get from conventional designs. Put another way, it doesn’t matter how loud or low something goes, it’s the manner in which it does so that matters. And Tom Danley’s bass is not only loud and low, it’s musical and defined.” The stadium’s roof and appropriate spacing also contribute to exceptional low frequency definition.

Heil microphones and a handful of other input sources feed a 16-channel Yamaha LS9 console, which in turn feeds a Symetrix 8×8 DSP with a Symetrix BreakOut 12 for additional outputs. “Given the circumstances, we didn’t have a lot of design cycle time on this job,” said Weir. “And as well as one might plan things out, the system requirements are likely to change on site. Symetrix has a reputation for building solid algorithms that are supported by well-designed analog circuitry. Its flexible open-architecture topology allowed me to perfectly tune the system functionality while I was in Juárez.”

Nine Ashly pe3800 and four Ashly ne2400 amplifiers power the system. All of the Ashly amplifiers are networked to allow Ethernet control from a central location. “Ashly is another company that puts sound and reliability first,” said Weir. “Their network amps are a great example of appropriate functionality. They sound great and maintain a robust low end even with a lot of speaker cable. Of course, that kind of sound quality is paramount. Beyond that, the network capabilities meet the client’s needs without adding any costly – but ultimately unnecessary – bells and whistles.”

He continued, “Clarity has no obligations to any manufacturer. I can use whatever I want in my designs. Given the design expectations and constraints at Juárez Vive, I’m certain that this is the only combination of gear that would have succeeded. It’s a very unique synergy, and I’ve never heard a better system for anything less than five times the price. From the client’s perspective, it’s simple: they have a far better audio system than even dared imagine possible, and they stayed on budget.”