These are some terms that confuse many in the audio industry, even though they talk about them as if they knew what they mean.

The purpose of this article is to hopefully help clear up the confusion, and provide some better understanding, to the terms, where them come from, how they are used, etc.

First of all, -3dB has no value.  It is like saying I have 27 money in my pocket.  Without a reference, it could mean pretty much anything.

The term -3dB, means that at a particular frequency, the level is 3dB lower than something else – it is that simple.

But what is that something?  It could be anything.  It is simply a number that somebody has assigned to something else.  It SHOULD be an average SPL level across the intended frequency response of the loudspeaker.  But often it is not-and is a peak in the response (to get a higher SPL number)

Let’s look at a couple of specific examples: 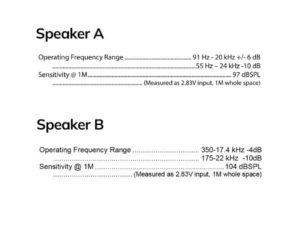 It would at first appear that loudspeaker A has more low end, because the -dB numbers are lower.

But we MUST also look at the sensitivity ratings.  THAT is the “something” that the -dB numbers must come from, or else they are completely meaningless. 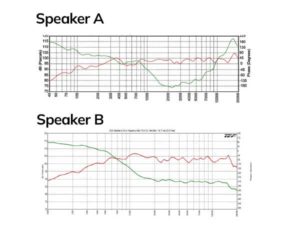 If you look closely at the graphs, you will see that 100Hz and 200Hz are the same sensitivity, (speaker A has more data points-so it appears to be slightly different around 100hz).

With the same power capacity, “the bass” will be just as loud on both of the cabinets.

However the “bass relationship” to the rest of the frequency response is not the same.

Speaker A will “appear” to have more bass, but that is simply because the mids/highs are lower in level than in speaker B, but the actual “bass levels” are the same.

If we chose the same sensitivity rating for both speakers, then the -dB numbers would be the same.  However, that number would not accurately describe the mid/high sensitivity.

The reality, is that both of these cabinets use the exact same drivers, and for all practical purposes the same cabinet.  The only difference is the HF driver and crossover circuit.

Let’s look at another example.  These speakers both have the same -3 and -10dB points and use the same loudspeaker driver, but in different cabinets. 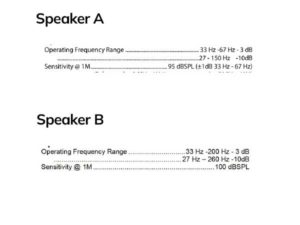 Which one produces “more bass”?  Many would say that they are equal, if they don’t look at the sensitivity numbers.

You will see that loudspeaker B can produce overall much louder bass, because the sensitivity is higher. 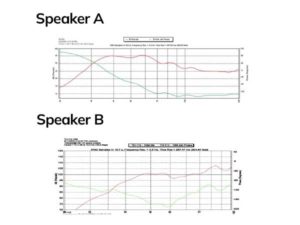 And just one more example.  These are completely different cabinets/designs etc.  They both use the same size driver-but that does not matter, just for information purposes. 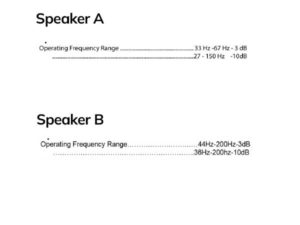 Many people would say that Speaker A “digs deeper” or “has more sub output” than speaker B.

But there are other things that MUST be considered.  Such as actual sensitivity (that the -3dB point comes from) and power handling.  So, let’s look a little bit further.

Let’s look at how loud each of these is at 30Hz: 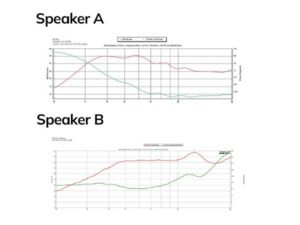 So, while it would appear as if speaker A “has more bass”, in reality, speaker B produces quite a bit more output at 30Hz and MUCH MUCH greater output above 50Hz

What does all of this mean?

It means a couple of things.  First, you MUST make sure that the sensitivity rating and the -3dB points are tied together.  If they are not, then both are meaningless as to the actual performance/loudness.

Second, you must look a bit deeper, including looking at actual response curves and not simple numbers, to come up with meaningful data.

All of it is related, a simple single number often does not begin to tell an accurate story of performance.

It also means that if a higher sensitivity number is chosen for the spec sheet, then the -3dB/-10dB points MUST go higher as well-everything slides up together.  But marketing does not like that, and sometimes these numbers are disconnected in order to get “better numbers”, which is misleading.

If you pay attention, you will see that things are more different than they first appear.