A CHILD OF MISSIONARIES IN CONGO, DANLEY ACOUSTICIAN DOUG JONES LEVERAGES HIS CULTURAL AND SCIENTIFIC UNDERSTANDING TO TEACH AT THE BILINGUAL CHRISTIAN UNIVERSITY OF CONGO 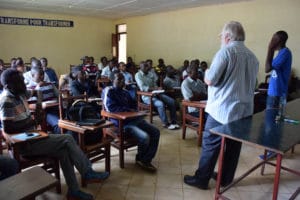 Doug Jones, director of Danley University, grew up in northeastern Congo, the child of missionary parents. Even now, his feelings about his childhood experience are complex: the benefits – difficult to articulate – came at considerable costs. “It’s hard to know how to share my story with anyone who wasn’t a missionary kid,” he said. “And yet it is my story; it shaped who I am today.” Jones has long mused about the radical discord between his childhood in rural Congo – steeped in a Christian institution – and his life’s work in professional audio, thirty years of it in the urban bustle of downtown Chicago at the decidedly-secular institution of Columbia College. “When I went back to visit the village I grew up in, I didn’t even have words to describe my professional field,” he said. “‘How can you work with sound? That’s absurd!’ everyone said.”

But that discord recently resolved to harmony with the invitation from childhood friend and fellow “missionary-kid” Dr. Paul Robinson to teach two weeks of intensive classes on technology and electrical engineering at the Bilingual Christian University of Congo. “It’s precisely because I’m a missionary kid from the Congo that I had a concrete vision for how to help Congolese students spark their own creativity,” Jones said. “And I wouldn’t have had the tools to do that without the thirty years I spent at Columbia College, honing my craft as a teacher in the fields of technology and audio.” Given his background, Jones was not going into the endeavor as most Americans might, wide-eyed and culturally inexperienced. 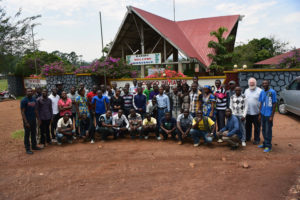 The Bilingual Christian University of Congo (more commonly abbreviated to UCBC in French, the official language of the former Belgian colony) was founded nearly a decade ago by Drs. David and Kaswera Kasali (both of whom obtained their PhDs in the United States). It is a liberal arts college founded on Christian principles. The US-based Congo Initiative raises money to help fund the school, as the vast majority of students do not have the means to pay their full ride. Six years ago, Robinson a senior advisor to Congo Initiative, asked Jones to help UCBC install a radio station and to develop curriculum in radio, which Jones happily did.

Recently, Robinson secured a grant to pay distinguished U.S. professors to teach intensive courses at UCBC. Given their common history and Jones’ cultural and professional expertise, Robinson asked Jones to be the first participant in the fledgling program. Danley Sound Labs President and CEO Mike Hedden – who puts his money where his mouth is in matters of faith and service – endorsed the leave that would be required for Jones to develop two intensive courses and to deliver them at UCBC. Logistically, Jones would instruct the same group of forty students for both classes, which would occupy eight hours a day combined (“too long!” laughed Jones, who diversified their activities to usefully fill their days).

The first class Jones developed was about the history of electromagnetism: the science, sure, but with most of the emphasis on the lives of the scientists who discovered and articulated the science, such as Georg Ohm, James Watt, Alessandro Volta, André-Marie Ampère, Michael Faraday, et al. “These were real people who lived real lives and faced real challenges and uncertainties,” Jones said. “For example, Ampère grew up in France during the revolution, and when he was sixteen, his father was guillotined for being on the wrong side of the political divide – a revolutionary at a moment when anti-revolutionary forces regained control. I thought that would resonate among the Congolese, who have a long, sad history of oppression, first by the Belgians, then by a string of nasty dictators, and now by indigenous war. They’ve experienced horrible things that most Westerners could scarcely wrap their brains around.”

He continued, “I though that by sharing the stories of these scientists, which in most cases amounted to a lifetime of struggle with zero guarantee of success, the students’ own struggles might be given a new perspective. If these scientists could succeed, then – by implication – so could these students.”

Jones quickly discovered that the Congolese education system is based on rote memorization – in fact, they had all memorized the names of the scientists to whom Jones had hoped to introduce them! “They had all memorized massive numbers of facts; way more than most Westerners have, but they were never encouraged to synthesize or explore the connections or implications of those facts,” Jones said. “We talked about Newton, and I emphasized that in addition to his creativity and mathematical genius, Newton’s greatest asset was his curiosity. He asked, ‘Why do things fall?’” Jones started out every day by writing in big letters on the chalkboard, “BE CURIOUS!”

The second course explored electromagnetism in a hands-on lab. Jones brought battery packs, light bulbs, resistors, nails, paper clips, etc. that would allow students to connect their strictly-academic understanding of electromagnetism with real experience. “It was less about teaching and more about letting the students explore,” Jones said. “These were applied engineering students in their sophomore and junior years who were on their way to becoming electro-mechanical engineers. They could recite Ohm’s Law and could do as much math as I could, but they could not connect that information with reality. Many of them couldn’t get the light bulb to light up – they knew what circuits were in an academic sense, but not in a real sense.”

One challenge proved especially illuminating: Jones asked the students to use a nail and lengths of wire to empirically determine the relationship between the number of wire turns around the nail and the strength of the resulting electromagnet, as measured by how many paper clips it could lift. “I asked them to present me with a graph of the results. Every one of them flipped the x- and y-axes, the independent and dependent variables. We all came to the realization that although they had all graphed functions in math class, it had never even occurred to them to graph data! That was important and eye-opening for everyone.”

Toward the end of his brief tenure at UCBC, Jones delivered a sermon during one of the chapel assemblies that summarized his grand hopes for the Congolese and that placed their challenges in a unique light. His four-point message emphasized the vital need for (1) a vision for the future of the nation, (2) a curiosity about the world, (3) self-confidence that the Congolese are a capable and worthy people, and (4) hope that life in Congo will continue to improve. Although he relished the classroom experience, Jones came away from the experience believing that future professorial visits should focus more on improving university-wide instruction with teacher in-services.