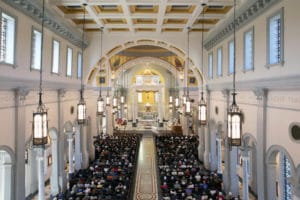 Founded in Knoxville, Tennessee in 1956, Sacred Heart Cathedral served as the cathedral for the Diocese of Knoxville from 1988 until very recently. It was superseded by the new 1,300-plus seat Cathedral of the Most Sacred Heart of Jesus, which was built on the same property for $30.8 million. With assistance from McCrery Architects (Washington, DC), the celebrated Knoxville architectural firm BarberMcMurry designed the space to be both sublime and functional. TSAV is a Georgia-based AV integration firm with international reach, and its engineers worked closely with all of the parties involved to purposefully design the facility’s acoustics and to design & install a sophisticated, high-impact sound reinforcement system. Musical content is capably conveyed by a Danley Sound Labs J3-64 Jericho Horn and four Danley SM80 loudspeakers for fill.

“We’ve completed several successful projects with the Catholic Church including two recent sound reinforcement systems at churches in Georgia,” explained Keith Reardigan, TSAV VP of technology & standards and senior systems architect. “That, together with several successful projects with the lead architectural firm, put us in the paint. We were brought in early and contributed our expertise to programmatic design and acoustical design. For example, we were able to suggest acoustical treatments that would nicely balance the often-conflicting needs for intelligible spoken work and lively music. Whereas an untreated room of comparable size might normally have a six to eight second reverb, we brought the Cathedral of the Most Sacred Heart of Jesus down to around two seconds when empty – enough to really help with intelligibility but not so much as to spoil the music.”

In that same spirit, Reardigan knew that it would be best to keep the direct path of sound reinforcement confined to listeners’ ears and not splashed up on the walls. Being mindful of the cathedral’s resplendent, low-tech aesthetic, TSAV installed a music reinforcement system at the back of the room, hidden below the choir loft. “We knew we didn’t want to excite a lot of air and surfaces unnecessarily,” Reardigan said. “We’ve completed several projects that had that same imperative with Danley Sound Labs loudspeakers, and we’ve been impressed with the Danley design’s ability to deliver a coherent waveform over long distances and its related pattern control. Danley was a great choice here as well.”

A single Danley J3-64 Jericho Horn – the same massive loudspeaker used to throw sound around in some of the world’s largest stadiums – covers almost all of the seating from its location under the choir loft. Four additional SM80s – two for near fill and one each for the two transepts – complete the music production system. QSC amplifiers and BiAmp DSP drive the system. A Bose column array system at the front of the church coupled with K-Array micro-format speakers integrated into overhead hung lighting fixtures provide primarily speech reinforcement, and a Yamaha QL console together with custom Crestron controls allow an engineer to control both setups. The Crestron interface allows the church to use the system for simple events without requiring an audio tech to run the console.

Ivan Beaver, Danley’s chief engineer, traveled to Knoxville to help commission the system. “Like everyone on Danley’s team, Ivan was an excellent collaborator,” Reardigan said. “We’re really happy with how this system came together.” Glen Kahler, director of music and liturgy at the church, said, “The space is fantastic. The team at TSAV was able to find the happy medium between high speech intelligibility and lively acoustics for music – neither is a sacrifice. The loudspeakers are wonderful and fill the space beautifully.”