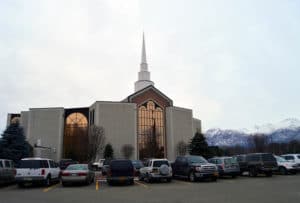 Founded in 1956 by a missionary, Anchorage Baptist Temple (ABT) is now one of the leading religious institutions in Alaska. The spirit and drive of ABT’s beloved pastor of 45 years, Dr. Jerry Prevo, has played a big role in making the church what it is today. In addition to his responsibilities at ABT, which also operates a Christian school, Dr. Prevo has founded four Christian radio stations and a Christian television station, and he produces a daily radio program (Bible Principles To Live By) and a daily television program (Anchorage Baptist Temple Hour with Dr. Jerry Prevo). Under Prevo’s watch, ABT has grown from 300 members to over 2,200 members, which spurred the construction of a stunning 2,100-seat sanctuary in 1992. Partly because ABT’s services have become more contemporary and partly because the sanctuary is hosting more and more Christian musical acts, AVL consulting and integration firm Michael Garrison Associates (MGA, Fresno, California) recently installed a massive Danley Sound Labs sound reinforcement system that includes Synergy Horn full-range loudspeakers, Tapped Horn subwoofers, and over 300,000 watts of Danley integrated processing/amplification that connects with the rest of the system via primary and backup Dante networks. 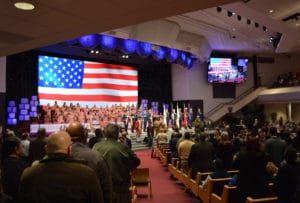 MGA’s founder and president worked with ABT to put the very first sound system into its sanctuary back in 1992, and MGA handled a subsequent renovation in 2003. When amplifier channels and DSP began failing recently, ABT’s technical staff determined it was time to overhaul the system. “The demands on our venue had changed significantly,” said Bryan Dunfee, ABT’s technical director responsible for lighting and audio. “Since the previous system went in in 2003, we’ve been doing a lot more live dramatic performances and concerts, and we knew we wanted to meet the requirements of riders for large acts going forward. Even for our own services, the demands had gone over and above those required by a typical worship band and speech.”

As sometimes happens, the decision to design and install a new system came with an extreme timeline: the word “go!” came in late September with the expectation of a finished system in early November. “We were in full swing before the phone was hung up!” laughed Daniel Durst, senior consultant with MGA. “Fortunately, we had already done a layout for an upgrade using past components. In the interim, Bryan had gotten to work on Danley systems while he was working a tour, and he was deeply impressed with Danley’s fidelity and approach. We had recently completed a church installation in Ohio involving Danley components and were similarly impressed. We received great support from Joel Moak, Danley’s western sales manager and Doug Jones, director of Danley University and famed acoustician. They helped us choose appropriate components and, together, we modeled every aspect of ABT’s sanctuary. I really wanted everything nailed, all the way down to mic placements and phasing.” 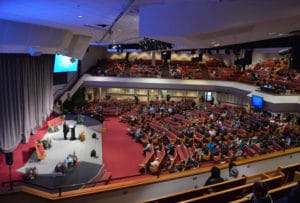 As it turns out, Durst’s careful preparation was time well spent: the realized coverage is perfect and none of the components needed to be adjusted from their prescribed placements. Main coverage is achieved with seven Danley SH-96HOs arrayed above the front of the stage in a left-mono-right-center-left-mono-right pattern. Each main box has a paired SH-95HO for down fill. “Danley’s famous pattern control was evident when we could obviously walk into and out of the beam, and the predicted placements and angles worked out perfectly,” Durst said. Dunfee added, “The high-frequency output on the ‘HO’ versions was the right way to go – they sound great!”

Thanks again to careful planning and expert commissioning, the bass response from the full-range boxes rolls seamlessly into the output from six Danley TH-118 subwoofers which are flown, tight pack in the center cluster portion of the soffit over the stage. According to Dunfee, the TH-118s are more than capable of rattling the entire building. The size of the room and its balcony and under-balcony areas necessitated a delay system. Five Danley SH-96HOs comprise the upper-balcony delay and twelve Danley SH-95HOs comprise the under-balcony delay. Eight new Danley SM-80M floor monitors service the stage, and sixteen Danley SH-Mini’s provide Danley clarity in the sanctuary’s foyer.

Between the time a new system was installed in 2003 and this newest renovation, ABT upgraded the FOH and monitor consoles to DiGiCo SD7 and SD10s respectively. Both units have the capacity for Dante networking, but the church had only used Dante in a limited capacity before the Danley upgrade. Because the newest generation of Danley “DNA” amplifiers include Dante connectivity, MGA wired up the new system using Dante exclusively, save for the monitoring system. “It’s shocking to look at the back of the amp rack,” said Dunfee. “It looks naked; it’s almost creepy! But everything is carried on CAT5 cable, with a redundant backup network built right in.” In all, one dedicated Danley DNA SC48 processor pairs with fifteen 4-channel Danley DNA 20K4 Pro Dante amplifiers with integrated processing and two four-channel Danley DNA 5K4c amplifiers.

“One of the most amazing things about ABT’s new Danley system is its complete lack of distortion, even at concert-level volume,” said Durst. “The boxes all work well together, and there are no phase issues. There’s no mud in the low-mids. Every note in a bass line is distinct and balanced. The high end is also crystal clear. We tuned the system up to be completely flat to almost 16 kHz… it’s like, how is that even possible!? Apart from its musicality at any volume, the Danley system is also excellent for spoken word. Intelligibility is never an issue anywhere in the sanctuary.

“With a nice, flat, undistorted system, we’re free to shape things however we like from the console,” said Dunfee. “We can go smooth and soft, hard and punchy, or anything else, depending on the nature of the music and the circumstance. Our church members are happy with the Danley upgrade. They keep commenting on how full and lush everything sounds. It can be loud, but it’s never sharp, edgy, or painful. We’ve got a huge age range, from tots, to teenagers who like it loud, to seniors. The system works across all those age ranges and sets us up for big successful concerts.”