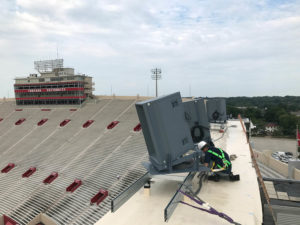 The Big-10 Indiana University Hoosier football team plays its home games at Memorial Stadium on the university campus in Bloomington. The stadium holds nearly 53,000 fans and is currently under major renovation. The university is building out the south end zone, which used to support Memorial Stadium’s main scoreboard and sound system. The south end zone renovation will be completed in time for the 2018 season. In the interim, designer Anthony James Partners and installer All Pro Integrated Systems, joined forces to provide Memorial Stadium with a temporary Danley Sound Labs sound reinforcement system. This temporary system uses many of the same components that will move to the south end zone for the permanent system once construction is complete.

Larry Lucas, the system designer, used Danley’s free Danley Direct modeling software to design the system. “With the output from Danley Direct, we had the aiming worked out from the start,” said Jacob Robinson, project manager at All Pro Integrated Systems. “It worked great; there are no phasing issues and the coverage is complete. We are measuring over 100dB at the furthest seat from the speakers. The temporary system consists of two mirror-imaged clusters, each consisting of a Danley J3-64 Jericho Horn and a J6-42 Jericho Horn, and a Danley OS-80 for side fill. All Pro has worked with Danley and Anthony James Partners in the past to design a custom-welded mount for such situations which was employed again at Memorial Stadium. 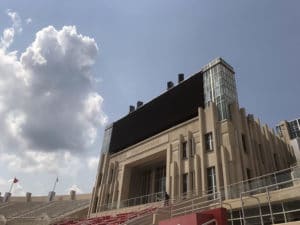 Robinson continued, “In addition to giving us great output, great fidelity, and great coverage, the Danley system also came with Danley’s great support. Typical turn around for a job like this would be four to eight weeks, but we had a restricted time line on this project. Danley hit every deadline, including producing the loudspeakers in just over two weeks! All around, Danley’s support has been awesome.

Next season, All Pro will put the Danley Jericho Horns in their permanent locations on the completed south end zone. They will be joined by other Danley boxes, including two 3-box subwoofer clusters for cardioid directivity. “Next year will be phenomenal, but this year is already a huge improvement over their old ‘permanent’ sound system,” Robinson concluded.

Find a Distributor
By clicking the “Accept” button, you consent to the use of all cookies on your device to give you the best site experience. Do not sell my personal information. Accept Cookie Settings
Manage Cookie Consent