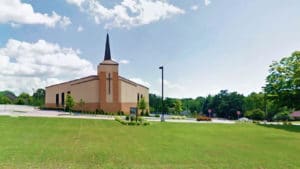 As the congregation at Redeemer Bible Church in Minnetonka, Minnesota grew steadily larger, its low-ceiling, A-frame sanctuary seemed to grow steadily smaller. Eventually, the inconvenience it created threatened the church’s ability to continue growing, prompting a fundraiser for a newer, bigger, and all-around better sanctuary. Rather than relocate, as many churches are forced to do, Redeemer was able to use its existing real estate for a new 500-seat sanctuary, attaching it to its existing building as a massive addition. Twin Cities-based Station 19 Architects and Audio Video Electronics (AVE) collaborated to design and build an inviting worship space with Danley Sound Labs point-source stereo loudspeakers paired with a flown Danley directional subwoofer array, vibrant video and LED lighting, and speech-enhancing acoustics – all on a budget. 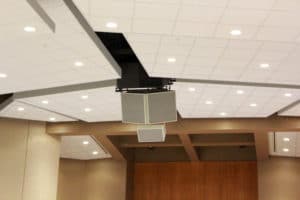 “Redeemer’s old sanctuary (which is now the lobby!) was a very low A-frame design,” explained Stefan Svärd, owner and president of AVE. “The ceiling was so low that projection was difficult, and the acoustics and distributed sound system had less punch than they needed to fully convey the church’s contemporary worship style. By getting involved in the project from its very earliest stages with Station 19, we were able to design a new sanctuary that was not just better than their old system, but excellent in its own right. One of the keys to giving Redeemer great speech intelligibility with well-integrated low end was the careful placement and configuration of Danley Sound Labs loudspeakers and subwoofers.”

AVE’s design called for two Danley SH-60 full-range loudspeakers for main coverage and a Danley SH-96 full-range loudspeaker for downfill. The three loudspeakers are close-packed in a central cluster flown above the edge of the stage, and Svärd cites their exceptional pattern control, which extends deep into the low-mids, as one of the main ingredients contributing to the excellent intelligibly and musical impact of Redeemer’s new sanctuary. In addition, the room’s bass response, though potentially floppy with a two-second reverb time, is kept in check by careful configuration of two Danley TH-115 subwoofers that are flown above the full-range cluster.

“Although they’re becoming more popular, flown directional subwoofer arrays are still far from the norm in church sound reinforcement systems,” said Svärd. “Flying the subwoofers as a directional array allowed us to side-step a number of potential difficulties at Redeemer. First, we couldn’t simply hide the subs under the stage because the stage is quite low. Second, given that we were going to fly them, it made sense to do a directional array. A single sub or an omnidirectional array would have excited too much low-frequency energy, and that was the room’s acoustical weak spot. The low end would have gotten sloppy. But with the directional array, we were able to focus the low-end energy on the listeners and to minimize low-end excitation of the walls and ceiling. Finally, by keeping the subs and the loudspeakers in the same place, arrival times and phase coherence are optimized, which really makes the system sound ‘natural’ across the entire spectrum.”

Svärd used Danley’s free DDT bass array calculator to help design the directional bass array, which provides a measured 20dB of rejection below 40Hz and 12dB of rejection between 40 and 120Hz. “The entire system is punchier, cleaner, and tighter with the subwoofer and full-range energy focused on the listeners,” he said. To keep everything within budget, Redeemer decided to reuse their existing Yamaha M7 console. EV CPS 4.10, 2.12 and 2.4 amplifiers and a Symetrix Solus 8 processing support the system, with Crestron IP Link control for an intuitive end-user experience. An ElectroVoice RE92H room microphone provides audience response for online streaming and recording purposes. Vivitek DW-6675 projectors illuminate painted screens (another cost-saving measure) and Phillips LED lights give Redeemer a stunning, energy-efficient way to influence the mood of its services.

Because AVE was involved from the very beginning, the acoustic treatments at Redeemer Bible Church optimize the compromise between effectiveness and cost. Its precast concrete walls and floor benefit from carpeting and padded seats in addition to an intentional avoidance of parallel surfaces. Thick ceiling clouds contribute beautifully to the room’s aesthetic while soaking up what little acoustical energy falls outside the Danley boxes’ beams or make it to the ceiling as a higher-order reflection. Acoustic panels along the back wall further reduce higher-order reflections, and acoustic panels adjacent to the stage soak up early reflections from the band.

“Redeemer benefitted by having everyone on board early when critical decisions could be made that would benefit the project down the line,” Svärd said. “We were able to meet their budget while still delivering a knockout sound, video, and lighting system that will serve the congregation for a long time to come.”