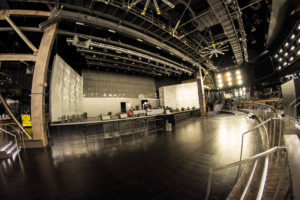 When legendary rock band Cheap Trick agreed to play Las Vegas’ Foundry Hall for New Years Eve, their veteran FOH engineer Bill Kozy expected line arrays, and their veteran monitor engineer Steve Funke expected old-school 15-inch wedges. However, Foundry Hall uses Danley Sound Labs point-source loudspeakers. “Engineers are used to seeing line arrays, and Danley’s smaller footprint can put them off,” explained James Rush, co-owner of JR Sound, the firm responsible for designing Foundry Hall’s system and for its day-to-day operation. “I had a couple of Danley’s new J3-94 Jericho Horns and their new DNA 20k4 Pro and DNA 10k4 Pro amplifiers on loan from Danley for demos, and the Cheap Trick guys were happy to give them a spin. It would be a nice, big way to do New Years Eve! Long story short, they loved Danley’s coverage and clarity, including our on-stage Danley SM-80 monitors.”

“The Danley system was amazing, and I loved everything about it,” said Kozy. “It was a little strange to just see one box per side, we usually tend to think that ‘more is better.’ But Danley’s technology really works. The output was focused on the crowd and was very even, which made it easier to mix and gave the fans a better experience. We had plenty of volume. As far as mixing goes, I didn’t have to alter my approach at all – it was business as usual. To other engineers, I would say, ‘Don’t be thrown off by the visual. The Danley sound is solid.’”

The band used Foundry Hall’s existing Danley SM-80s for monitors – a dozen in all. “[Monitor engineer] Steve was pretty wedded to the idea of having 15-inch monitors, especially for Cheap Trick’s drummer, who doesn’t use subwoofers and yet needs a big, loud kick,” said Rush. “I said, ‘trust these 12-inch Danley SM-80s, they’ve got plenty of output.’ He discovered that I was right. They were loud and clear and had all the low end that he needed. The band gave a solid performance!”

Foundry Hall may eventually move to a Danley Exodus rig, which delivers Danley’s patented point-source clarity from a line array footprint. “Engineers can take comfort in the visual that they’re so used to, but gain the benefit of Danley’s far superior sound, which is free of comb filtering and all the other tortuous processing that line arrays require,” Rush said.