DANLEY ASSISTS IN CONVERTING AN OLD GYMNASIUM INTO A STUNNING SANCTUARY 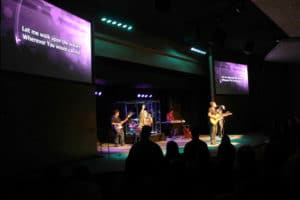 The Journey North Community Church near Brainerd, Minnesota has been steadily growing since its first service in 2004. That day, 130 people showed up to a rented room in the city’s community center, a space that would serve as the church’s temporary home for many years. Recently, Journey North acquired an old Lutheran church school building in nearby Baxter, Minnesota and set about the task of converting its reverberant gymnasium into a contemporary worship space. Twin Cities-based Audio Video Electronics (AVE) assisted, repurposing old classroom acoustic tiles and using other low-cost ideas to give the worship space vastly improved acoustics and lighting. Importantly, AVE installed a Danley Sound Labs SH-96 for main coverage and two Danley SM-60Fs for side fill. Danley’s point source phase coherence maximized intelligibility and fidelity, and its tight pattern control kept energy off the walls and ceiling. 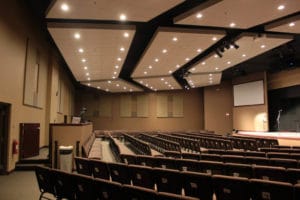 “Brainerd is a vacation town for a lot of Minnesotans, and I spent some time there a while back at the Brainerd International Raceway,” said Stefan Svärd, president of AVE. “I attended a Journey North service with my family at the community center and was impressed by the spirit and excitement of everyone involved. Flash-forward a year, and the church had purchased an old Lutheran church school building. To accommodate its large congregation and contemporary worship style, Journey North wanted to convert the gym into their worship space. They had a lot of challenges and were working on an unusually tight budget. They had never been happy with the ‘PA-on-a-stick’ solution they used for sound reinforcement at the community center, and beyond that, they would have more seats to cover in the new church.”

AVE used every creative idea in the book to tame the gymnasium’s five-second reverb time. Most importantly, AVE had the church save the drop ceiling tiles from the church’s classroom spaces, which were being remodeled to serve as a spacious lobby. They turned them into acoustical ceiling clouds in the new sanctuary, which, together with some additional batting on top, a few wall panels, and absorbent chairs, went a long way toward improving the sound of the room. The clouds served double-duty; they also served as anchors for a very inexpensive – and yet highly functional – house lighting system. Approximately 80 six-inch can lights, each outfitted with a low-cost dimmable Par 30 LED bulb to get the desired light level, accommodate different events and moods from an inexpensive wall-mounted dimmer pack. For projection, the church used high-quality screen paint on the walls and framed each “screen” with neat wood trim.

Despite the dramatic improvements to the room’s reverb time, the system still needed all the help it could get. “Sound quality was paramount,” said Svärd. “Given its output, fantastic fidelity, and pattern control, we went with Danley Sound Labs loudspeakers for main coverage of the room. There are less expensive loudspeakers on the market, sure, but given everything we get with Danley, their products clearly offer the best overall value. Danley fidelity is unmatched.” Svärd explored options and decided on a single Danley SH-96 for main coverage of the room. Though not a subwoofer, the SH-96 packs four 15-inch drivers and boasts impressive low-frequency response. Two Danley SM-60Fs, one on either side of the SH-96, provide side fill with exceptional pattern control.

AVE was able to reuse many of the components from the church’s old system, such as their Behringer x32 mixer. The addition of a digital snake and a Behringer P16 personal monitoring system rounded things out. A new QSC Q-SYS system provides processing and amplification for both the main system and the overflow and lobby systems. Twenty QSC ADS52T ceiling loudspeakers cover the lobby, the overflow, the cry room, and the rest of the rooms. In addition, two Tannoy VX8 loudspeakers provide front fill in the sanctuary, and existing Mackie subwoofers provide additional low-end support. “They love the sound of their new sanctuary,” said Svärd. “As soon as they have the budget for it, they’re excited to upgrade to a Danley DBH-218 subwoofer. That will give them tight, articulated sound from the lowest lows to the highest highs.”