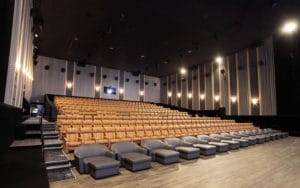 Emagine Entertainment operates innovative movie theaters throughout the Midwest, and it recently completed a five-million-dollar renovation of its Emagine Novi location in the northwest suburbs of Detroit, Michigan. A huge part of that renovation included the merger of former theaters thirteen and fourteen to provide space for the state of Michigan’s largest screen and 320 luxury reclining chairs from which to enjoy it. In addition to a state-of-the-art Christie laser projector that perfectly illuminates every square inch of the 92’ x 48’ screen, Emagine opted to support the visuals with a 64-channel Dolby Atmos system led by five Danley SH96HO point-source loudspeakers and a powerful Danley BC418 subwoofer.

David Zylstra, chief technical officer at Emagine Entertainment, collaborated with Tom Ruhling, director of entertainment technology, to design the technical aspects of the new theater. “Danley was an excellent fit for the situation,” Ruhling said. “Given the size of the space, the typical pro cinema loudspeakers were a bit too light for the task at hand. Line arrays, in addition to being way too expensive, would have given us headaches with comb filtering and smearing. In contrast, Tom Danley’s patented technologies deliver true point-source output with incredible fidelity and almost undetectable distortion, despite their ability to produce impressive SPLs. Importantly, Danley boxes are fairly priced, especially when you consider how few boxes are needed compared to a line array.”

In anticipation of the big renovation at Emagine Novi, Ruhling installed three Danley SH96HO loudspeakers at the Emagine Canton location a year ago to give them a real field test. “That has been my preferred house to see a movie ever since,” he said. “I can hear every small detail, but there’s tons of punch when it’s needed. I recently watched 10 Cloverfield Lane, which features a car wreck. Unfortunately, I’ve been in a few car wrecks myself, and I have to say, it felt real. It was breathtaking. I’ve been working with cinema sound for over thirty years, and I’ve never experienced anything like a Danley system.”

The new system at Emagine Novi uses five Danley SH96HOs for the main left, left-center, center, center-right, and right loudspeakers. A Danley BC418 subwoofer, with its components arranged to provide directivity, provides substantial low-end support. “The Danley BC418 has the ability to shake the entire complex from end to end,” Ruhling said. “Whereas conventional subwoofers have 8 – 15% distortion beyond 60Hz, Tom Danley’s patented design makes distortion almost non-existent. It’s hard to put into words, but it’s so honest. It’s like hearing the bass from my high-end monitors at home… expanded out to a 320-seat room!” QSC amplifiers, processing, and surround sound speakers complete the system.

In addition to a great sound system, Ruhling was impressed by the support he received from Danley Sound Labs. “Whereas most other companies tend to disappear after the purchase has been made, Danley has been with us every step of the way and continue to support us,” he said. “It started with the Canton system; a Danley engineer flew in to assist with commissioning. At Novi, Doug Jones came out early in the process, and after everything was installed, Skip Welch, joined Doug and came out to hear the system and give it a final tuning. Throughout the process, Skip was always at the ready to answer a question, and he even recommended a less expensive loudspeaker than the one we had been considering because it fit the application better. I really couldn’t ask for a better partner!”