The University of New Mexico football team, the Lobos, plays all of its home games at University Stadium on the school’s south campus in Albuquerque. Erected in 1960, University Stadium underwent several expansions that brought its current seating capacity to just shy of 40,000. Recently, the school replaced its former south end zone scoreboard with a new Daktronics LED scoreboard in the north end zone, opting to include loudspeaker enclosures in anticipation of a new sound reinforcement system. That system has now arrived in the form of two Danley Jericho Horn J3 point source loudspeakers supported by two Danley BC-218 subwoofers, with power from Danley’s new DNA-Series of DSP-enabled amplifiers. 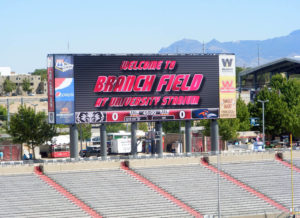 “These days, a great sound reinforcement system is the twelfth man on the field for the home team,” said Larry Lucas, director of audio and broadcast engineering at Anthony James Partners and the designer of University Stadium’s new sound reinforcement system. “A great sound reinforcement system energizes the crowd and gives the home team an even bigger home field advantage. We’ve had great success installing Danley Jericho Horns at bigger stadiums, such as Louisiana State University’s 102,000-seat stadium, but they’re also great at smaller stadiums like University Stadium at the University of New Mexico.” The project had a tight timeline: bidding began in August and Daktronics had the system installed in the beginning of October. “The lead times were extremely short,” Lucas said, “but Danley had all of the equipment in New Mexico on schedule.”

The system design is straightforward. A powerful, point-source Danley Jericho Horn J3 flanks either side of the north end zone scoreboard to cover the east and west sides of the stadium, as well as the stands beyond the south end zone. Four smaller Danley SH-46 full-range loudspeakers hang from the bottom of the scoreboard for front fill, and a single Danley SH-96HO loudspeaker fires from a low angle across the field for on-field coverage. “The team is really happy about the great on-field sound,” Lucas said. “It’s good for the players and great for team morale.” Because Lucas purposely kept the Jericho Horns’ tight beams from including an athletics facility adjacent to the south end zone, he also included a handful of fully-weatherized Danley OS-80 loudspeakers to cover seats near that facility.

Rather than split the two Danley BC-218 subwoofers to parallel the Jericho Horn placement, Lucas placed both subwoofers on the west side of the scoreboard. “We’ve been coupling Danley subwoofers together since we installed a Danley system at the University of Iowa’s 70,000-seat Kinnick Stadium. By keeping the subs together, we get much better low-frequency response and minimal low-frequency comb filtering. Two BC-218s still deliver plenty of SPL for the entire stadium.”

Inputs to the system include a new Denon DN-300Z combination media player with CD, USB, and SD card inputs, an AM/FM tuner, Bluetooth connectivity, and a 1/8-inch jack, along with a new collection of Lectrosonics wireless handheld microphones and a Click Effects ProAudio audio clip player. A Yamaha 01v96 digital console collects all the inputs and serves as user control for the system. From there, signal flows to a QSC Q-SYS DSP system, which primarily handles input conditioning and routing logic. Three Danley DNA 20K4 Pro amplifiers and three Danley DNA 10K4 Pro amplifiers provide a total of twenty-four amplifier channels, each supported by integrated loudspeaker conditioning DSP.