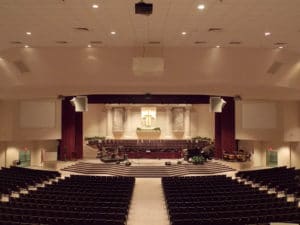 For a long time, First Redeemer Church in Cumming, Georgia didn’t have a purpose-built sound reinforcement system for its stunning 2,200-seat sanctuary. The contemporary band that rocked the morning service, as well as the orchestra and two-hundred-plus voice choir that supported the traditional service, played through the repurposed remnants of a sound reinforcement system that had once serviced their converted warehouse where the church first started. Years of band-aids and add-ons averted disaster, but the room was so unevenly covered that a foot in either direction was often significantly different, with obvious phasing in the travel. Now, a pair of Danley Sound Labs’ most powerful point-source boxes, Danley Jericho J1-94s, deliver stunning stereo imaging with abundant low-end support from a beefy Danley BC-415 subwoofer flown in the center of the room. “First Redeemer now has the best sounding sanctuary in the world,” averred Scott Oliver, owner of Centerline Audio Visual of Hendersonville, Tennessee. “I would put it up against any other system, at any price!”

Oliver designed and installed the system, with custom rigging and fly-ware by Diekhoff Company (Nashville, Tennessee). “My philosophy is always to use as few speakers as possible,” said Oliver. “There’s less destructive interference and fewer alignment issues. Instead of using more speakers for a larger room, I prefer to use larger speakers. A lot of people think I’m nuts for designing Danley Jericho Horns into this, but the results say otherwise. The Jericho offers stunning detail and clarity. It’s very accurate – like a giant studio monitor. With two of them, the stereo imaging is vivid, and it is easy to pick out each and every instrument on stage. Even sitting in the balcony, you can hear the snares rattling and different hi-hat velocities. And even though it’s been said a billion times, it’s still true: Danley’s pattern control is unbelievable. The coverage at First Redeemer is remarkably even.”

In addition to the two Danley J1-94 loudspeakers and the BC-415 subwoofer, a pair of Danley SH-69s provide down-fill for the first few rows and a pair of Danley SH-46s provide side-fill. An existing Digidesign Venue console is still in use and feeds a pair of Danley DSLP-48 processors. Three new Danley EDA 12k and four new EDA 4.8k amplifiers power the system “We did a shoot-out with a number of high-end commercial amplifier manufacturers, and the Danleys had the most consistent measured RMS power level,” said Oliver. “Moreover, I like that they are just straightforward amplifiers – no crazy bells and whistles. The whole system embodies the same sort of simplicity – just a couple of processors, 52,000 watts, a handful of (large) loudspeakers, and one massive subwoofer!”

First Redeemer had originally considered purchasing a line array system from another super high-end loudspeaker manufacturer. “We did an entire design and brought in a system to test,” explained Jeff Baggett, First Redeemer’s audio engineer and a Nashville mastering engineer. “It sounded great, and I was skeptical that Danley would be able to touch it. Scott [Oliver] brought over a pair of the Danley Jericho Horns and powered them up. Immediately it was game over. The Danleys ate the other system for lunch. They were tremendously even and had no finger lobes at all. We even matched the EQ curve of the other system to try and make it a fair fight, but the Danleys still killed it. Now that the system is properly installed and voiced for the room, it’s even better. I love it. It’s the kind of sound that makes you want to just bring in some music and listen. The reproduction is so accurate that I could easily master an album on the system. It’s that good. And the subs are just incredible.”

“The very first song we pulled up had no EQ or processing, but already the new Danley system sounded 3,000-times better than the old system that they had been trying to perfect for sixteen years,” said Oliver. “By the time we where on song three, it sounded like a record. The mix was expansive and rich. When we went to the traditional service, Baggett was mixing sixty channels of audio, and anyone in the congregation could easily distinguish each one of those instruments. The church was also impressed by the price tag for this world-class sound system. It was about one quarter the price of the original line array that they had considered!”