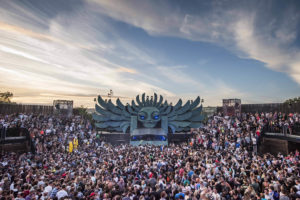 Almost every year, for what is fast approaching half a century, tens of thousands and, in recent years, capacity crowds of 135,000 have descended on the tiny village of Pilton in southwest England to attend the Glastonbury Festival. The festival runs for five days and includes plenty of music on multiple stages, plus movies, dance, art, circus, theater, and all things cultural, multicultural, and countercultural. This year, Neuron Pro Audio of Manchester, UK, handled The Temple Stage in The Common section located in the southeast Corner of Glastonbury, where they deployed Danley Sound Labs’ Pure Groove loudspeakers, Jericho Horns, Synergy Horns, Tapped Horn Subwoofers, and DNA amplifiers/DSP to thrill the five thousand-plus attendees of The Temple’s Drum ‘n Bass, Rave, and DJ sets. Stagecore Productions, led by Steve Bedlam and Bertie Hunter, handled all technical provisions for The Common area and contracted Neuron Pro Audio. Danley UK, the distributor for the UK and Ireland, assisted.

“The brief for The Temple stage from the design team of The Common was to minimize the ‘DJ as a god’ feeling that you often get with stages of this size,” explained Kyle Marriott, who designed the system for Neuron Pro Audio with the help of Neuron project manager Jonny Wharton. “To that end, the bleachers and walkways were built in the round so the majority of the crowd faced each other, rather than a large stage. Likewise, the DJs and performers were housed in a small, ground level pavilion, with the focal point being the large projection mapped and laser-hosting Aztec head.” The brief also requested a distributed sound system so that everyone in The Temple area received impactful – but not overbearing – sound, along with clean sightlines to the Aztec head. 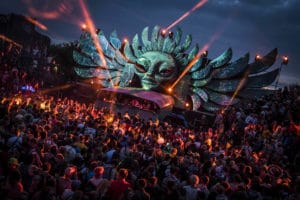 Neuron Pro Audio won the gig over a leading big-name line array manufacturer that had proposed using way more boxes than the Danley system required. To support its bid, Neuron provided a proper demo of what a Danley system can deliver, along with sensible modeling of The Temple space. Neuron brought just two Danley J3-94 Jericho Horns and a sub array of Danley TH-118 subwoofers into Motion, a Bristol, England warehouse-type venue. “We were able to convincingly demonstrate that we could fill a large space with consistent, even coverage using a fraction of the boxes normally deployed for such a venue,” Marriott said. “In addition, I produced comprehensive simulations of both SPL and coverage for the main speakers, the fills, and, importantly, the sub arrays, by importing the designer’s own SketchUp files into [Danley’s free modeling software] Direct and marking out designated audience areas before placing speakers in the correct position. I was also able to implement both end-fire and CSA cardioid setups in a ‘toggle-able’ state that showed the impact and reduction in SPL that they could achieve. That was vital to securing a sign off for the system design from Glastonbury HQ and its noise management team.” Marriott then recreated the SketchUp file using custom equipment models so that the on-site staff and build/break team knew where everything needed to be placed.

The sound system consisted of two Pure Groove by Danley PG-J94 Jericho Horns and two Danley J3-94 Jericho Horns arranged in four points radiating outward from above the stage. In total, twenty-two Danley TH-118 subwoofers contributed to three subwoofer locations: two end-fired arrays at stage left and stage right plus one CSA cardioid array at the back of the space. All the subwoofer arrays were configured to minimize output in the direction of the village and in the direction of other nearby stages. Four Danley OS-80 loudspeakers provided fill for the walkways around the very upper and outer edges of the space, and two Danley SH-96 loudspeakers provided fill for partiers enthusiastically pinned up against the DJ booth!

Because Danley amps are so efficient, relatively few boxes were needed for The Temple, which made setup and teardown as easy as it could be. “It only took a small crew working half a day in the strong (for the UK!) sunshine to get everything in place,” Marriott said. “People may be put off at first by the apparent weight of a Jericho Horn, but in practice it is simply the equivalent of moving a cart of three or four line array elements around a field… yet one Jericho does the job of up to five of those carts. Overall, rigging time was reduced, and the crew was able to site and set angles and rotation easily. They simply pointed the box where the crowd was going to be! It’s a lot more logical, once you get past the novelty of a single, large format horn taking the place of many smaller cabinets each requiring their own fiddly hardware to set splay angles and such.”

Once it was built, the system took very little effort to tune. “We did a lot of pre-planning work,” Marriott said. “I have spent considerable time with the system and have an alignment that works well if the sub and main box fronts are co-located together. It allowed me to carry out the majority of the on-site alignment using a range finder and verification via dual-channel FFT. The consistency of phase and magnitude across the Danley range also allowed them to smoothly integrate together. Once alignment delays and the cardioid arrays were set up, I ended up with just two points of equalization that I placed by ear during our narrow-allotted window for tuning.”

For The Temple’s noise propagation test, Marriott ran the system at 109dBA in the center of the dance floor, 25 meters from any individual speaker, a location that simultaneously measured 130dB SPL at 63Hz. “Essentially, it was loud,” Marriott laughed, “and many of the production staff came up to me and asked if we’re expecting to run it that loud during the show. We take people’s hearing very seriously, but the test demonstrated that we could maintain accurate, punchy dynamics without running hard into limiters. That said, propagation passed with flying colors, despite the massive SPL inside the venue. The off-site noise management team in the local villages and residences could not hear our venue at all, showing that our design minimized spill outside of the open-air venue very well. Chalk that one up to point source power and careful aiming… not complex DSP!”

Neuron Pro Audio got positive comments about the sound quality from every level. Artists, production staff, and fans went out of their way to let the staff know how impactful, clear, and consistent the sound was throughout The Temple. Afterward, the company fielded plenty of emails, comments, and enquiries about the system and, now in Marriott’s words, “how on earth we achieved such results using only four main speakers and six fills across a 50m x 50m area! It indicates exciting times ahead for Danley in the UK!” A well-known reporter, Jon Snow of Channel 4 News, actually posted a photo of the stage on his Twitter account stating that The Temple venue was the most impressive he had seen on site, both visually and sonically. “In addition, the festival’s long-time director and figurehead Michael Eavis chose The Temple stage to do an official ‘welcome speech’ on Thursday evening,” Marriott said. “That’s very unusual; he usually does the welcome from the 100,000 capacity Pyramid stage. I’m also happy to report that he was able to stand right in front of a Danley Jericho Horn with an open mic and zero feedback.”

He concluded, “The show could not have gone more smoothly for our first expedition to the legendary Glastonbury site. The design tools and data provided by Danley UK, plus the communication from the Common and the Stagecore staff and crew, allowed everything to work as expected, with minimal fuss. It was very humbling to be welcomed into such a large expansion of this long-running area, and we subsequently become the talk of the festival.”

For anything Danley in the UK and Ireland please contact info@danleyuk.com or visit their website at www.danleyuk.com For all the latest news please visit their Facebook page at Danley UK Sound Systems www.facebook.com/danleyuk/

To learn more about Neuron Pro Audio please visit their website at www.neuronproaudio.co.uk