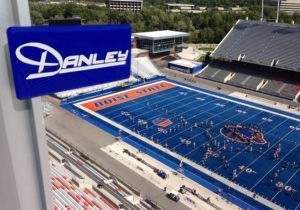 Boise State University is justifiably proud of its Broncos football team, which has only lost four games at home since 1999. In ninety-one other contests, the visitors left Bronco Stadium’s famously blue field in defeat. As the program gained regional and national notoriety, Bronco Stadium grew from 14,500 seats to its current 36,000, but the stadium’s original sound reinforcement system failed to grow with it. When a local beef producer promised money to update the stadium’s similarly outdated scoreboard, the university scrambled to match money so that it could leap forward with a cutting-edge video board and sound reinforcement system. Although the timing was far from ideal, local A/V integration firm Production Services International complemented the scoreboard expertise of Daktronics (Brookings, South Dakota) by designing, installing, and commissioning the new sound reinforcement system in just six short weeks. Danley Sound Labs delivered its high-SPL, high-fidelity, USA-built Jericho Horn loudspeakers, BC subwoofers, and OS-80 weatherproof loudspeakers to meet that tight deadline, and the results are, by all accounts, fantastic.

“The original system was designed for a much smaller stadium, and it was pretty much designed for speech only,” explained Brian Kohagen, the sales and audio engineer with PSI who designed the new sound reinforcement system and oversaw its installation and commissioning. “The Boise State University marketing department was forever asking for a high-energy, full-range sound system that could really pump up the crowd.” Kohagen drew up his original value-engineered design with a different loudspeaker manufacturer, but the 120-day timeline placed some serious challenges in the way. “It all came together so fast, it was hard to find any manufacturer that could deliver,” he said. “I had heard a Danley system at Brigham Young University, so I knew that Danley’s growing reputation for high-SPL, high-fidelity stadium sound systems was well-founded. I spoke with [Danley President] Mike [Hedden], and he assured me that their US-based manufacturing plant could deliver.” And they did.

He continued, “The real challenge at Bronco Stadium is throwing sound from the scoreboard clear across the field and past the other end zone to the opposite seating two-hundred yards away. There is no place for a real distributed system to exist, as there is no roof system at Bronco Stadium. It has to be an end fired single source.” Four Danley J3-64 Jericho Horns, two on each side of the new Daktronics scoreboard, provide the lion’s share of the coverage. Their exceptional pattern control keeps the sonic energy on the fans and prevents it from spilling outside of the stadium – an important achievement given neighbors’ frequent complaints about the old system’s pattern-free leakage. Four Danley OS-80 weatherproof Synergy Horn loudspeakers provide fill for the seating area directly below and in front of the new scoreboard where the Jericho Horns overshoot. “We easily met all of our coverage and SPL requirements,” said Kohagen. “All of the Danley full-range boxes have tremendous clarity, and we were fortunate not to have to rig any fly system. The catwalk in front of the scoreboard gave us perfect aim. All we had to do was make some adjustments left and right and then lock them in place.”

For low end, Hedden recommended a pair of Danley’s new BC-415 subwoofers, which are designed to provide exceptional bass response and exceptional directivity, especially when two units are coupled. Kohagen used them that way, placing both subwoofers just above a pair of the J3-64s. “Wow, does that bottom end throw!” exclaimed Kohagen. “It’s amazing! I can sit two-hundred yards away on the stands behind the opposite end zone, and the bass still shakes the structure. It’s completely full range and sounds fantastic. Everybody that we’ve talked to has been extremely happy with it.”

Kohagen was pleased with his first-time experience working with the people at Danley Sound Labs. “Mike [Hedden] helped me out with the preliminary design,” he said. “In the weeks running up to the installation, I was completely in the loop regarding the manufacturing and shipping schedules. When it came time to commission the system, [Danley Application Engineer] Chad [Edwardson] flew out to help me voice the system. He was extremely knowledgeable and we finished the job in just one day. There were a few challenges as well, and Danley was right on top of them. One of the subwoofer drivers had glue that had not set properly, which I discovered during testing at the shop. I was on the phone with [Danley Chief Engineer] Ivan [Beaver] Sunday before the first game, and we had the replacement on Tuesday.

The most memorable moment was during the system commissioning, when we powered up the subwoofers to see what they could do. “The video board installers had been working all day and prevented a full system test up to this point, so we hadn’t heard the system at full volume,” relates Kohagen, “At 4pm we got the all clear that they were off the structure, and we lit up the low end. About sixty seconds later my phone was ringing, the head football coach was asking how long this was going to take. It turns out, his office is directly below the scoreboard, and the low end coming off the BC 415s was shaking the wall and items on his shelf. One picture actually fell off the wall.” At that point, I knew we had a kickin’ system in place, and the response from the football fans have been nothing but positive.