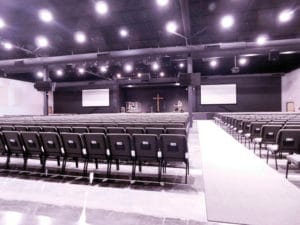 Founded at the turn of the century – this century, Lighthouse Church in Maryland has been growing apace since the day it opened the doors at its original, 24,000 square-foot building. To accommodate the demand, the church opened satellite campuses and continually expanded the number of weekend services offered, but it was never enough. Thus, Lighthouse Church recently moved its flagship services to a new 74,000 square-foot building in Glen Burnie, Maryland. Solsound, a Maryland-based A/V integration and production firm that had worked with Lighthouse Church in the past, designed and installed a distributed Danley Sound Labs sound reinforcement system that includes Danley SH (Synergy Horn) loudspeakers, SM speakers, GO2 compact loudspeakers, TH (Tapped Horn) subwoofers, and DNA multichannel amplifiers with onboard DSP and Danley model processing templates.

“The new sanctuary takes up about 12,000 square feet in the center of the building and seats about 1,000 people,” explained Art Reiger, who founded Solsound in 1988. “We’ve been working with Lighthouse Church for many years now, doing system upgrades on their old system, training, and productions of special events. They asked for our help with the new facility, which was quite an audio challenge because the space is 120’ x 100’ x 22’ with hard surfaces throughout. Clearly, the all-to-common line array approach would energize the room too much; we needed a distributed system.” Reiger noted that Lighthouse Church employees and volunteers capably supplied much of the labor involved in the project, which helped everything stay within budget while still meeting all of the church’s needs. Their help was critical and they went beyond the call.

“I met with the folks at Danley at InfoComm last year,” Reiger continued. “I thought their products sounded outstanding, which was consistent with a friend and fellow A/V professional’s assessment. He’s an avid Danley integrator. The product’s sound quality, coupled with the very human interactions I had with the Danley team at InfoComm and after led me to investigate a Danley solution at Lighthouse Church. They have a wide range of products to fit a wide range of situations. What sealed the deal was the support I received from [Danley engineering director] Chad [Edwardson] and [Danley customer service specialist] James [O’Neal]. Their customer support was stellar. They were happy to talk whenever I called, for as long as it took. With Danley’s support, we were able to design a killer system that was within the church’s budget.”

The system features an exploded cluster at the front of the room comprised of one Danley SH-96 flanked on either side by a Danley SM-80. Those loudspeakers cover the first half of the room. Halfway back, four Danley TH-118 subwoofers provide low end for the entire room, with four more Danley SM-80s covering the mid- and high-end content for the back half of the room. Solsound installed the SH-96 and the TH-118s on shock mounts to prevent any potential structural vibrations from upsetting the sixty Elation LED fixtures that light the seating area. Finally, Solsound installed nine of Danley’s new GO2 8CX compact loudspeakers distributed throughout the spacious Lobby, the “Grand Hall” adjacent to the sanctuary, and the back entrance area.

One each of Danley’s DNA 20k4 Pro, DNA 10k4 Pro, and DNA 5k4C amplifiers with built-in DSP power the system. At four channels each, the total system delivers twelve channels, each with its own loudspeaker conditioning DSP. Reiger used the available DSP presets, which are tailor-made for every loudspeaker and subwoofer in the Danley catalog, to help quickly dial in a great sound. “Danley’s amp and DSP specialist, Josh Millward, was great to work with,” said Reiger. “We’ve worked with a half-dozen or so DSP platforms from different manufacturers, but still, it was great to have “the Guru” on the phone whenever I had a question! I remember specifically that Josh found a great solution for muting the 5k4C during fire alarms, which was a bit of an “out of the blue, last minute” construction stipulation.”

Lighthouse Church brought their existing Allen and Heath in-ear monitor systems and console to the new sanctuary. Solsound installed ten CBI stage boxes, with CAT5 connections for personal monitors and XLR inputs. Juice Goose units handle all the power conditioning. Vivitek projectors and DaLite screens support visuals in the sanctuary, and a four-channel in-house cable TV system distributes content to classrooms, the lobby, and other places. A great amount of credit also goes to the folks at 4 Wall Lighting in Columbia, Maryland for all their help on the lighting systems, our local Vivitek reps (Audio Associates) for their help with the projection system, one of our local alliances IKBPAC (a local Danley integrator) and the folks at Washington Music for their product support.