The Florida State Seminoles play all of their home games at Doak Campbell Stadium, which has grown from 15,000 seats in 1953 to nearly 80,000 seats today. The name of the field itself honors head coach Bobby Bowden, who led the Seminoles to over a dozen championship wins between 1976 and his retirement in 2009. Against that storied backdrop, Florida State University now has the most powerful sound reinforcement system of any sports stadium in the world Powered by 320,000 Watts of clean Danley Sound Labs power, the system is also the first to feature two massive Danley J-5 Caleb loudspeakers, which have proven capable of delivering 113dB of clean, undistorted audio to the seating beyond the opposite end zone, along with additional Danley Jericho Horns, Synergy Horns, and BC subwoofers. 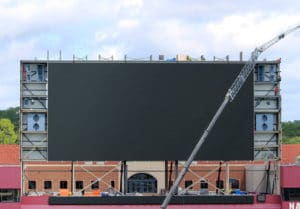 Larry Lucas, director of audio and broadcast engineering at Anthony James Partners, created the new design for the system, which relies entirely on Danley’s point-source boxes. “Unlike most stadiums of its size, Doak Campbell Stadium has no balcony from which to hang a distributed system, or even to hang fill speakers,” said Kyle VanLandingham, project manager for All Pro Sound of Pensacola, Florida, the company that installed the system. “The relatively small footprint of the Danley speaker system allowed us to utilize spaces within the scoreboard structure instead of creating new spaces in various areas around the stadium. Aside from the increased simplicity of installation, the Danley Caleb and Jericho series speakers provided the absolute best solution for clear, impactful coverage across an incredibly large space.” Michael Walden, systems designer at All Pro Sound, worked with Lucas’ plans to make the design a reality.

“As opposed to a line array solution, Danley allowed us to meet FSU’s budget while still delivering jaw-dropping pattern control, low-frequency output, and plenty of natural-sounding volume and intelligibility,” said Chris Bencsik of Bencsik Associates, Danley’s manufacturer’s rep in Florida. “Moreover, Danley has proven that it can turn around product on a short timeline, such as this one. It was a spring award with completion in midsummer. It’s a credit to Danley that they had all of the boxes ready on time.”

Among those boxes were two massive Danley J-5 Caleb Horns, which provide coverage for the field and the far side of the stadium. At ten feet tall and strategically packed with 108 drivers, the Caleb Horn fires phase-coherent audio with a 40-deg by 15-deg beam width and frequency response down to 30Hz. Doak Campbell Stadium is the first facility to use more than one Caleb Horn. “The Caleb is truly amazing,” said Bencsik. “It has incredible pattern control and clarity at distance. The measurements made at distance blew me away!”

“From what I understand, FSU now has the most powerful sound reinforcement system in all of sports,” said VanLandingham. “At four channels each, sixteen Danley DNA-20K4 PRO amplifiers power the system. You’re not going to go to a sporting event anywhere else and get a better experience. This system is at the top.” Walden added, “The low-frequency impact is a phenomenon in its own right. I sat on the opposite side of the stadium and felt the drums of the FSU chant hammer into my chest. It’s very impressive.”

In addition, the relatively few boxes made installing the system comparatively easy. “The two Caleb’s provide a significant portion of coverage to the stadium, with five additional Jericho’s making up most of what’s left. To see a stadium of this size, evenly covered by six full-range speakers and four subs on each side of a scoreboard is impressive. We had the entire speaker system installed, aimed, and commissioned in a matter of days, not weeks,” said Walden. “In addition, it will be a lot easier to tweak the system as it settles in.”