Director of operations Maggie Bailey tasked SLSO live sound engineer Ron Bolte with finding a solution that would increase intelligibility without the need to treat the room while keeping sound levels down on stage and meeting Powell Hall’s high standards for aesthetics. Bolte knew immediately that pattern control was the most important loudspeaker specification. 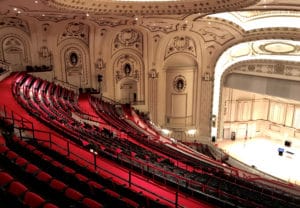 “From the start, this process was about finding a solution to our problem, not about buying a specific brand or technology,” Bolte explains. “What makes Powell Hall an excellent acoustic hall makes it challenging for amplified sound.”

The 2,683-seat venue also hosts musical acts without the orchestra as well as events like the Maryville University Speaker Series that features luminaries such as former U.S. presidents and astronauts. “With the Jericho system, I can walk to the downstage edge with a omni headset microphone, whisper, and there is sufficient gain before feedback to provide intelligible audio everywhere,” Bolte notes. “And it sounds the same everywhere. If I mute the balcony boxes it doesn’t change the sound on the floor or Grand Circle, so if no one is sitting far up we leave them muted.”

An unanticipated bonus is the re-use of existing rigging hardware and loudspeaker cables from the prior system. Bailey states, “When we started looking at the time and cost of hanging loudspeakers and running cable all over the room for new delay rings, including AC [power] that would be required for some systems, it adds up really fast. The Jericho solution allowed us to re-use the rigging and cable already in place, and we’re not using the old underbalcony delay ring.”

The new system also incorporates a pair of Danley TH-118 subwoofers, although the six 15-inch woofers in each J3 are stated as being solid down to 70 Hz. “Some events require low end extension, so having true sub energy can be helpful,” Bolte explains.

The J3s also utilize eight 6.5-inch cone drivers and four 1.5-inch compression drivers, with all transducers (including the woofers) mounted on a Synergy Horn. The patented design mounts multiple drivers of different bandwidths into a single horn and makes them behave as a single full-range loudspeaker.

Covering the stage as side fills for rehearsals and other events are a pair of Danley DSL SBH-20s (Skinny Big Horn) loudspeakers. “The lack of pattern control with the current side fills created problems with feedback and intelligibility,” Bolte says. “SBH keeps so much sound away from where you don’t want it, the intelligibility is just fantastic.”

The new loudspeakers, except the front and side fills, are driven by just three amplifiers — a pair of Danley DNA 20K and a single DNA 10K. They incorporate integrated DSP and have presets for each loudspeaker.

“The partnership with Danley has been a truly collaborative effort, and we now have a system that enhances the experience of coming to Powell Hall and matches the artistic excellence of the St. Louis Symphony Orchestra,” Bolte concludes.

The St. Louis Symphony Orchestra is the second-oldest orchestra in the U.S., celebrating its 139th year in the 2018/2019 season, and it maintains an unwavering commitment to artistic excellence, educational impact, and community connections. The orchestra presents approximately 110 live performances at Powell Hall,  ranging from classical performances and education concerts to collaborations with popular artists and films with live scores. The SLSO’s impact beyond the St. Louis region is realized through weekly Saturday night concert broadcasts on St. Louis Public Radio, celebrated recordings, as well as regular touring activity.

In 2018, the orchestra is celebrating the 50th anniversary of Powell Hall as its home. Built in 1925 as the St. Louis Theatre, it was originally a movie theater and vaudeville house. Renovations began in 1966, and the new hall opened in January, 1968 as the first permanent home of the SLSO. The venue was added to the National Register of Historic Places in May, 2001.