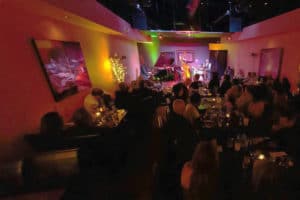 Although it’s been open for a mere four years in the northern suburbs of Atlanta, Georgia, The Velvet Note has attracted national attention. Its intimate room seats only forty and was carefully designed by George Seldon to support music with stunning, well-balanced acoustics. The world’s top jazz artists now make The Velvet Note a staple in their tour schedules because the on-stage experience is so transcendent; Christian McBride, Marcus Printup, Diane Schuur and the late great Lou Soloff, among many other jazz luminaries, have graced The Velvet Note’s stage. Downbeat Magazine named it as one of the best jazz clubs in the country!

“We take a lot of pride in the sound of our room,” said Tamara Fuller, The Velvet Note’s owner, visionary, and nightly head-of-ceremonies. “We call it ‘the acoustic living room,’ and we’ve done everything we can to make it the very best way to experience live music.” Indeed, The Velvet Note’s classy food is served on paper plates with plastic utensils, which may at first appear to clash with the décor and dress of the patrons… until you learn it’s to prevent the clinking of forks on plates from competing with the music! “Until recently, the only thing that wasn’t five stars about The Velvet Note was the PA system,” explained Bob Bakert, an Atlanta-based guitarist, vocalist, composer, and pro-audio veteran who regularly graces the venue’s stage. “I had heard Danley Sound Labs systems before, and I knew Danley’s fantastic phase-coherence and fidelity could elevate The Velvet Note’s PA system to the level of everything else in the venue.”

After consulting with Danley owner Mike Hedden, Bakert helped install two Danley SM-100 loudspeakers in a stereo configuration with a THmini subwoofer for low-end support. The room is only about twenty feet wide, so the stereo soundstage created by the SM-100s is more akin to a control room than a live venue. The THmini subwoofer is tucked back behind the piano, and Bakert purposely configured the system so that the subwoofer would not provide unnaturally loud bass. Rather, the subwoofer forms a balanced, low-end extension to the full-range boxes. “I’m impressed that the THmini subwoofer is so musical all the way down,” Bakert said. “It doesn’t have the resonances of a conventional sub, so you don’t lose pitch or continuity across different bass notes.” Danley DSLA7500 amplifiers with on-board DSP amply power the SM-100 and the THmini.

“From the start, I designed The Velvet Note’s sound reinforcement and acoustics to be unobtrusive,” Fuller said. “I want to give my guests the real deal – organic, real sound. The new Danley system has taken things further in that direction. It’s capable of conveying such subtleties; the granular specificity of each note and each instrument is so clear and beautiful. It’s like the difference between talking to someone on the phone and talking to them in person. There’s an intimacy of sound that makes it feel like there’s nothing between you and the music – like the music is reaching its arms around you for an embrace. Of course, I personally benefit the most since I’m there almost every single night!”

If you’re in Atlanta or passing through, be sure to schedule in a night at The Velvet Note to experience intimate jazz in a venue designed and operated by people as passionate about fantastic audio as you are!