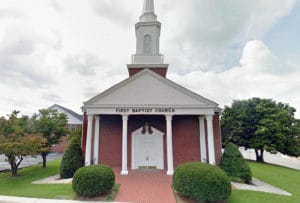 First Baptist Church of Smithville, Tennessee is the sort of small town Baptist church that has served as a community hub for decades. Its sanctuary is a very traditional rectangular Baptist-style building that seats around 400 people, with a small balcony, a high ceiling, pews, and carpet. Services continue to call on a talented choir, but these voices are mixed these days with an equally-talented band, making First Baptist Church solidly committed to a blended service. Design and integration firm Centerline Audio Visual recently installed an elegant Danley Sound Labs “hi-fi” system to make the emotional impact of the church’s services commensurate with the soul that is being poured into them from the musicians, pastor and guests.

“First Baptist Church of Smithville reached out to us based on a referral from another client who was very pleased with the Danley system we had installed for them,” explained Scott Oliver, president of Centerline Audio Visual. “The existing system at First Baptist was in terrible shape. A lot of the loudspeaker drivers were blown and the whole thing was really only marginally functional. I didn’t need to ask them what was wrong with their existing system, it was obvious. But I did go over all of their current and future needs so that we could deliver a system that would capably meet those needs without going overboard. I met with them, measured the acoustical properties of the room, and built out a model in EASE. From there, I found the ideal Danley loudspeaker configuration that would cover the congregation in glorious stereo without hitting the walls or ceiling.”

Oliver is known for having originated the use of Danley’s massive Jericho Horn loudspeakers (which are commonly used at 100,000-plus seat football stadiums and other huge-SPL venues) as stereo replacements in larger churches that would have otherwise used line arrays. Danley’s point source clarity, phase coherence, and complete lack of comb filtering make those system amazing hi-fi experiences, and legendary acoustician Tom Danley (head of research and development at Danley Sound Labs) refers to Oliver’s designs as “hi-fi systems.” “The biggest reason I keep coming back to Danley loudspeakers and subs is pure sound quality,” Oliver said. “There’s zero smear. It’s like the Claritin D allergy commercial: you pull away the film of conventional loudspeaker designs and Danley gives you crystal clarity.”

First Baptist Church of Smithville did not require Jericho Horns, but Oliver used the same simple approach. A pair of full-range Danley SM100B loudspeakers deliver stereo content from left and right positions above the stage, with supplemental low-end content from a Danley THmini15 subwoofer on the floor near the band. “I’ll admit I was surprised by the output from the THmini15,” he said. “It totally kills! It fills the entire room with well-defined bass!” Since the church already had a rack of newer Crown amplifiers, Oliver repurposed them for the new Danley system to keep costs as low as possible. A new Xilica XP-4080 DSP completes the system.

Noted, Chad Ramsey, lead pastor of Smithville FBC, “The difference the Danley sound system has made in our church is night and day. The previous system worked but it was very muddy. Words just never seemed to be clear when someone spoke or sang. I can remember the first time I heard the Danley system working. It was truly amazing. You could hear everything crystal clear. Not only that, there was depth to the sound. It sounded as if the band leader or speaker was sitting right next to you. Additionally, you could hear consonants clearly. One of the most impressive aspects of the system is how much our congregation enjoys it.”

Once it was installed and tuned up, a neighboring church came over to hear the improvement. “They called me up and asked for a quote on a similar ‘hi-fi’ Danley system for their church,” Oliver said. “We might just turn Smithville into Danleyville!”