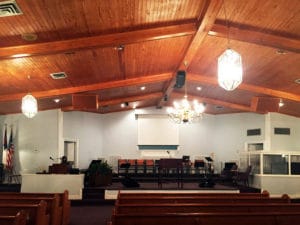 Christ Center Church serves the mid-size town of West Columbia, South Carolina, which is both a destination-town and a commuter-town for the much larger city of Columbia, South Carolina. It’s a Pentecostal church, and the energy on stage fills its three hundred-plus congregants with inspiration, hope, and the drive to do right in their families, communities, and world. After years of putting up with an old sound reinforcement system and with an important event on the horizon, Chris Center Church contacted Gattis Pro Audio to design and install a system with modern punch and intelligibility. Gattis made good on that request by installing Danley Sound Labs SM100B and Nano point-source loudspeakers.

“Christ Center Church had been using the same gear for a long time,” explained Sid Gattis, owner of Gattis Pro Audio. “It functioned, sure, but it lacked low end and the coverage patterns of the old loudspeakers blew straight into the drywall that encloses the place. They had a revival coming up in September, and they wanted to up their game with better speech coverage, greater fidelity, and the kind of musical impact that you can really feel. We’ve had a lot of recent success with Danley loudspeakers and subs, and I knew that their sound quality and pattern control would do a lot for the church, especially given its acoustics.” 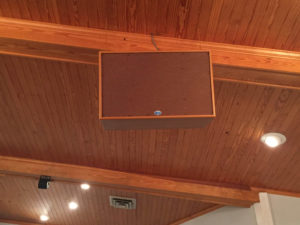 Despite its drywall perimeter, the sanctuary has a lovely wood ceiling, and the church officials wanted the color of the new loudspeakers to match the ceiling. Gattis took advantage of Danley’s custom-painting program: contractors can select a Sherwin-Williams paint number and Danley will deliver boxes with that custom paint color. “It keeps us from having to stain or paint boxes, which is a huge pain,” Gattis said. “It’s super affordable, much less than it would cost us to do it, and the results are a lot better than we’d be able to deliver. Christ Center Church chose ‘Kenyan Kopper,’ and it looks great!”

A stereo pair of Danley SM100B loudspeakers cover all of the seats in the sanctuary from their mounts above either side of the stage. “They have wider horizontal coverage than they did before and tighter vertical coverage,” Gattis said. “Unlike most Danley Synergy Horn boxes, the SM100B is wrapped in a Tapped Horn subwoofer. It has four 8-inch drivers, which always causes anyone who knows anything about audio to ask, ‘really? eight-inch drivers?’ To which I respond, ‘hey… just listen to it! The bass is phenomenal – fast, articulate, tight, and punchy.’”

Three Danley Nano boxes provide fill for the choir. “The Danley Nano is one of the most revolutionary boxes I’ve seen in a long time,” Gattis said. “It’s tiny so it hides well. And in this context, we really don’t want a ton of low end, but we do want a lot of intelligibility. The fidelity and sparkle out of a Nano is crazy!” A BSS Soundweb London DSP provides input and loudspeaker conditioning, and Yamaha amplifiers power the system.

Gattis observed that although an individual Danley box isn’t cheap, when you consider cost versus performance, it’s “the best deal in the world.” He continued, “When I start talking about Danley and everything a Danley box can do that a conventional box can’t do, people are surprised they haven’t heard of Danley. They’re used to the big three-letter combos that are still so big in the industry. I explain who Tom Danley is and what a unique background he has, and I explain that Danley’s technology is patented and truly unique. My clients trust me ‘cause I’ll never lie to them, and they’re very happy with the results!”