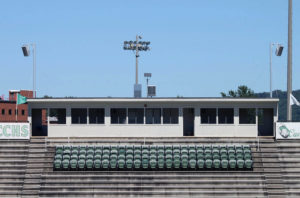 John Carroll Catholic High School in Birmingham, Alabama was in a position that many high schools find themselves in. Friday night football was a big deal, and many school departments – including the music and award-winning dance departments – gave it their all to make each game a memorable experience. But the sound reinforcement system that supported the game announcements and all the music was flat, unintelligible, and prone to failure. Engineered Audio Video – a division of Clear Solutions, Danley Sound Lab’s new Birmingham-based dealer, arranged a demo of Danley’s weatherproof OS-80 loudspeaker that convinced school officials that Danley was the right choice to take JCCHS’s game-day experience to the next level.

“There were several issues the school wanted fixed with a new sound system,” said Gary Boackle of ENGAV. “First, it seemed that their wireless systems were breaking up, but that turned out to be a different problem, and we were able to reuse their existing wireless mics. Second, the sound quality was poor everywhere and they only had a bullhorn-type loudspeaker for the visitors side. It was definitely not worthy of the talented students who put on the school’s halftime shows, including the school’s national championship dance team. Third, they wanted a system that could grow with the program; in particular, they were thinking of mic’ing up the band for greater musical impact. Finally, they wanted to restrict access to the system’s internals so that staff would be unable to make ‘improvements.’”

The Danley product that ENGAV proposed – the weatherproof OS-80 – is used in the upper bowl of Bryant Denny Stadium, the 100,000-plus-seat home to Alabama’s beloved Crimson Tide college football team. “Calling attention to a product’s prominence in collegiate and pro stadiums is a double-edged sword when we’re working with a high school-level client,” said Boackle. “On the one hand, of course, it speaks to the product’s performance. But at the same time, high school-level clients immediately get suspicious about the price tag. That’s where having an actual demo made all the difference at John Carroll.”

Danley’s Director of Sales, Jonathan “JP” Parker, traveled to the school with a Danley OS-80 and a Danley subwoofer to provide the demonstration. “When you’re talking to clients who don’t have a deep understanding of audio or acoustics, there comes a point where you can’t really convey the performance of a system in words alone,” said Boackle. “They simply have to hear it to get it. Even with a demo that was a third of the system we would eventually give them, they immediately knew Danley was the right choice. They were blown away! Even when they went over to the visitors’ side, everything remained clear and musical. The demo convinced them to bite the bullet, because they had received lower bids in the form of non-Danley proposals.”

The system ENGAV installed centers on three weatherproof Danley OS-80s and one weatherized Danley TH-118 subwoofer. Two OS-80s are affixed to poles behind the central press box for coverage of either end of the stands and field. The third OS-80 and subwoofer reside in the center of the press box for coverage of the middle stands, the middle field, and the visitors’ side. Inputs to the system include a CD player, microphones, an aux RCA, and an aux iPod jack. A Biamp Tesira DSP provides system processing and customized input selection and volume control, such that staff cannot change anything else in the system. QSC amplifiers provide the power.

“The compliments continue to roll in,” said Boackle. “There’s a competing high school about a mile away, and for years you could hear their announcements all the way over at John Carroll. With the new Danley system installed however, the flow has reversed. The Assistant Athletic Director was over at the neighboring school while both schools were hosting away teams, and he could keep up with the John Carroll game because the announcements were still intelligible after traveling all that distance! Every report we get comes with a big smile!”