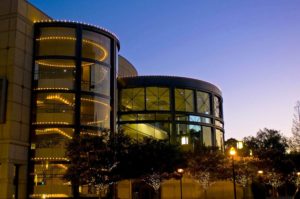 The Lesher Center for the Arts forms a cultural cornerstone for the bustling downtown of Walnut Creek, California, near-neighbor to the east of Oakland and San Francisco. Since its original construction and opening as the Nuthouse in 1967 and its subsequent reinvestment and expansion as the Lesher Center for the Arts in 1990, the center has attracted top theatrical talent and is considered the preeminent performance venue in Contra Costa County. Recently, local AV integration firm Premier Media Integration designed and installed a new sound system using Danley Sound Labs loudspeakers and subwoofers in the Margaret Lesher Theater, which greatly improved intelligibility, impact, and gain-before-feedback.

Of the Lesher Center for the Arts’ four theaters, the Margaret Lesher Theater is intermediate in seating capacity at 300. It’s commonly used for corporate events, musicals, and dramatic performances, with seating arrayed in a wide arc around the stage (making any simple two-box hang insufficient). “The old sound reinforcement system used quality components,” explained Graham Cooper, president of Premier Media Integration. “However, the system wasn’t designed for optimal coverage of the seating area, and there were lots of gaps and hot spots that made it difficult to mix a performance that would please everyone in the audience,” Cooper designed the system in collaboration with Rocky Giannetta of Layer 8, of Roseville, California, and oversaw its installation with Premier co-owner and head tech Gordon Fava.

Cooper continued, “The Lesher Center wanted a purpose-built sound system for the room that would provide even coverage from front to back. The wide shape of the room and proximity of the nearest seats to the stage made that a challenge; it called for more than a stereo system and more, even, than a left-center-right system. In situations where precision coverage and high fidelity are required, we’ve had a lot of success with Danley Sound Labs’ point-source loudspeakers. The Danley boxes are highly focused and allow us to hit seating areas very precisely. By the same token, they keep energy off the walls and ceiling, which also contributes to high intelligibility.”

Cooper and Giannetta designed a system that uses three Danley SH69 loudspeakers for left-center-right and two Danley SM60F loudspeakers for in-between: center-left and center-right. Because of the way Danley’s patented technologies work in the context of the design, the five loudspeakers knit nicely together without obvious seams or gaps. A pair of Danley TH112 subwoofers flown behind the center speaker fill out the low end. New Xilica processing in conjunction with PowerSoft amplifiers drive the system, with user control provided by an existing Yamaha digital console. Because the Margaret Lesher Theater is booked almost every day, the Premier Media Integration team had to work quickly and cleverly to pull the old system out and put the new system in with minimal disruption.

Opening night for the new system was a performance of Freaky Friday, the classic tale of the hijinks that ensue when a mother and daughter switch bodies. “They had as many as twenty actors on stage, all with open headset mics, and because the Danley speakers are so focused, there was no feedback – or even the threat of feedback,” Cooper said. “Everyone raved about the improved sound quality. Members of the tech crew noticed the difference right away, and all the season ticket holders – who were well aware of the deficiencies of the old system, were happy to enjoy the even coverage and high-fidelity output.”