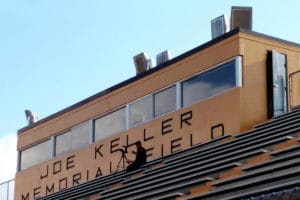 Reserve, Louisiana is a mid-sized town just 45 minutes west of New Orleans and home to East St. John High School. Its citizens typically swelter in 90+ degree heat and humidity throughout the summer, and equipment left outside in the Southern Louisiana climate has to be ready to stand up to its practically tropical conditions. When the football fans and staff at East St. John could no longer tolerate the weak, inarticulate coverage from a puny scoreboard-mounted sound reinforcement system, they called on local A/V integration firm Lion’s Roar Church Audio to provide them with something better. Based on a string of successful Danley installations that consistently “exceeded expectations,” Lion’s Roar owner Danny Wilson opted for Danley’s fully-weatherproof OS-Series loudspeakers and subwoofers to deliver the goods. His expectations were, again, exceeded!

The East St. John High School Wildcats play in an approximately 2,000-seat stadium with concrete bleachers. “I know a lot of high schools in Texas have concrete stadiums, but it’s pretty rare in Louisiana,” Wilson said. “It shows you how seriously they take their football! However, the original sound system was just a handful of small horns mounted on the scoreboard. It didn’t have enough horsepower, and it didn’t live up to anyone’s expectations. I did my first installation with Danley loudspeakers in 2010, and every Danley installation since has not only been great, it has exceeded my expectations. And that’s saying something because my expectations keep going up! So, I modeled the system in EASE with Danley’s weatherproof OS-Series loudspeakers and subs. It looked good on paper, and given all the good experiences I’ve had with Danley, I jumped at the chance to try out the OS-Series boxes.” Danley’s OS-Series loudspeakers and subwoofers use famed acoustician Tom Danley’s patented technologies to deliver robust, full-fidelity sound. 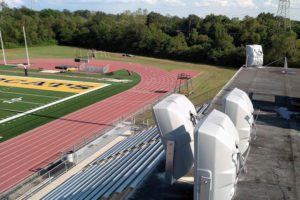 The school came to Wilson with only a few weeks before the first game of the season, so he placed his order right away. “Danley was on the ball,” he said. “The speakers went out on the very same day!” Although the press box at East St. John H.S. is oddly asymmetrical with respect to the home side stands, Wilson was still able to use three Danley OS-90s on the ends and in the center of the roof to cover the home side seating. “The coverage is perfect,” he said. “No seat is left behind!” A single Danley OS-80 also fires from on top of the press box, but its angle hits the field and the visitors side seating. “I was a little anxious about covering the opposite side with that single box,” he said. “But it worked well. I walked the field and the stands and any volume differences were negligible.” Finally, to give the system a solid low-end base of support, Wilson installed two Danley OS-115 subwoofers.

“Stepping back, the thing that impresses me most is just how musical the Danley boxes are,” Wilson said. “Even for an outdoor system – it’s the kind of system that you really want to listen to music on.” New Crown amplifiers power the system from a rack inside the press box. After peacefully meditating for the few hours it took to drill out through the press box’ thick concrete walls, Wilson had the sublime pleasure of affixing security nuts through its roof and back into the concrete ceiling. To round the system out, he reconditioned an existing BiAmp Nexia processor/mixer and installed a Tascam CD200 D player with iPod dock for media playback.