Doing What No Other Loudspeaker Can Do: A Single Point-Source Danley SM96 Brings Crystal-Clear Intelligibility to St. Joseph Catholic Church 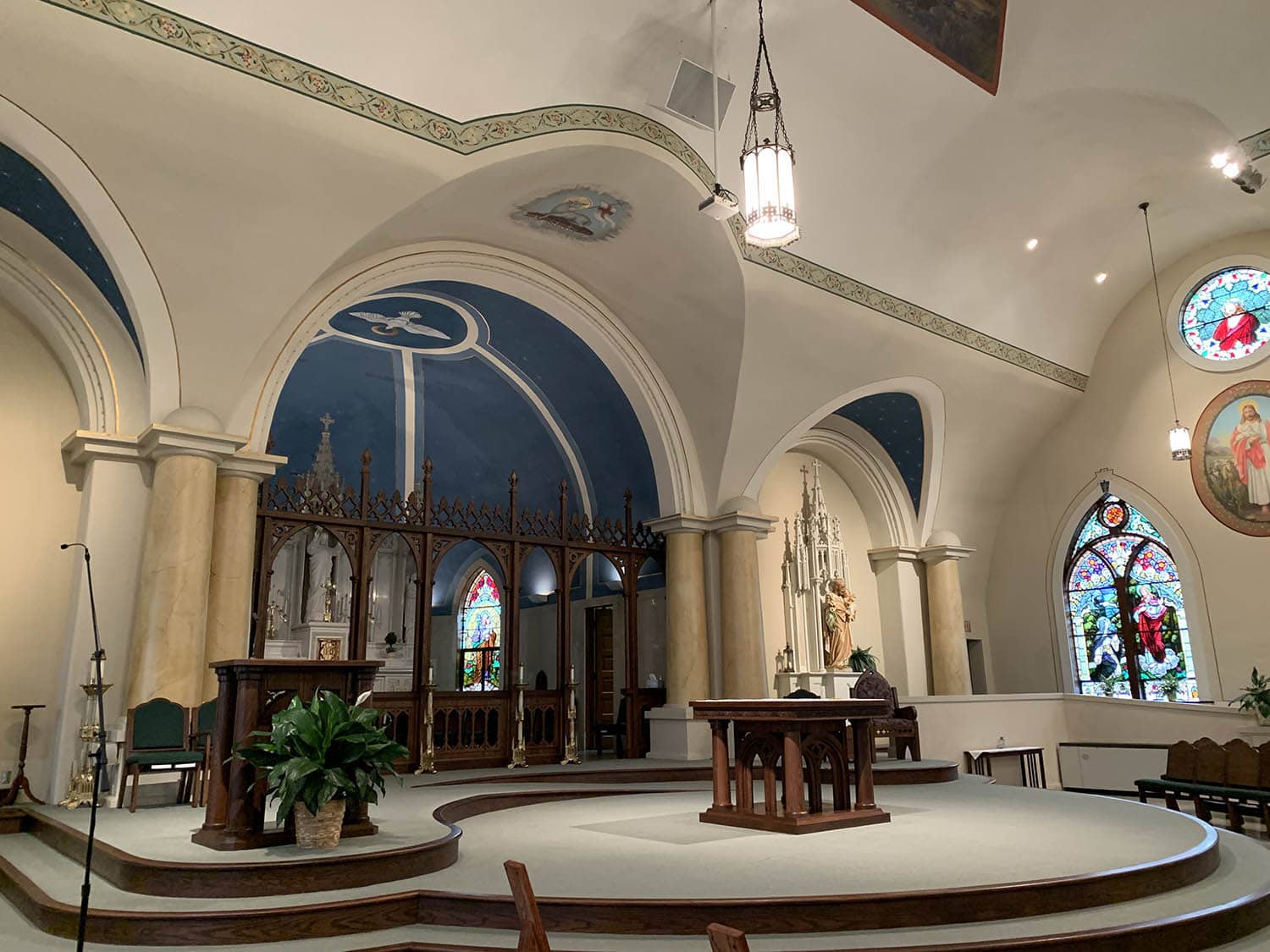 St. Joseph Catholic Church in Kalamazoo, Michigan is blessed with a beautiful 250-capacity sanctuary replete with stained glass windows, smooth white walls, and an ornate baptismal font. It was built in the 1910s and continues to serve as a cornerstone of Catholic social life in Kalamazoo. Unfortunately, an outdated sound reinforcement system made it difficult to understand what was being said during St. Joseph’s services. Local AV integration firm, Sound Connections Group, turned a tremendously terrible situation into a practically perfect one with the installation of a single Danley SM96 loudspeaker. The turnaround was so complete that it earned Sound Connections Group founder and owner Duane David an enthusiastic hug from St. Joseph’s priest and accolades from its parishioners at the conclusion of the first service with the Danley in place.

“St. Joseph Catholic Church had a handful of old loudspeakers in place that were blasting the room and walls with sound and adding chaos to the already poor acoustics,” explained David. “To make matters far worse, the church’s priest, Father Antony, is a native of India. His accent made the sound reinforcement system’s intelligibility problem far more consequential. Trying to understand him was nearly impossible. The church had already removed most of the low end by the time I was called in, which was a good move considering the situation. I was able to make a few more adjustments to make the system usable, but they really needed new loudspeakers using a fundamentally different approach. We arranged a demo.”

David brought two distinct Danley Sound Labs models for the demo – a Danley SBH20LF column-form loudspeaker, which, like all Danley loudspeakers, benefits from point-source purity, and a Danley SM60 loudspeaker. “Danley’s coverage patterns are perfectly even and tight, which is critical in this case to keep energy off the walls,” David said. “Related to that, they sound the same whether they are ten feet away from you or fifty feet away. They never have that ‘far-away’ sound. Within the pattern, Danley’s fidelity and intelligibility is excellent.”

David researched Danley’s many available models with different coverage patterns to select one that perfectly matched the shape and size of St. Joseph’s sanctuary. In the end, a single Danley SM96 flown above the apse covers the entire room with very little energy hitting the walls or extending down to the stage, thus dramatically minimizing feedback problems. David ordered the SM96 with Danley’s color-matching program, making it practically invisible to anyone except a sound reinforcement enthusiast. “I didn’t have to do much tuning,” he said. “I set the crossover and did a couple of little subtractions around 500Hz to deal with room modes and that was it.”

At the conclusion of the first mass with the new Danley system, Fr. Antony found David and gave him a big hug! “He was overjoyed,” David said. “The improvement compared to the old system is night and day. A few people approached me and explained that with their hearing issues, they had never been able to understand Father Antony before – not a word. But with the Danley in place, they understood everything! I really can’t imagine a better outcome.