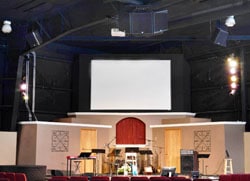 Fellowship Bible Church in Tacoma, WA began as a gathering of friends in a living room on July 7, 1977 (7-7-77) and grew over the decades that followed to become a beacon in the community. The church moved into its current 750-seat sanctuary in 1996 and developed an engaging contemporary worship style complete with a small band.

However, church members were long dissatisfied by the sound quality in the sanctuary. So when they recently raised the funds, the goal was implementing the best sound reinforcement system to replace it. That search took them to Audio Video Electronics, a Twin Cities-based A/V integration firm with extensive experience designing and installing systems based on Danley Sound Labs  components.

Now, Danley Synergy Horn loudspeakers and DBH subwoofers provide articulate musical reinforcement with even coverage. “The old system was in a pretty sorry state when we first arrived to meet and understand their needs,” says Stefan Svard, president of Audio Video Electronics. “They were most interested in getting a new system that would be consistent; Consistent not only in its day-to-day performance, but consistent in its coverage of the seating area.

“One of the things I really like about Danley is the phase coherency of its designs. It makes for consistent patterns and, perhaps more importantly, remarkably consistent sound quality within that beam. I’ve been a Danley supporter for a long time now, and I’ve really come to believe in [president] Mike [Hedden] and the rest of the company.”

“The whole system is much simpler now,” notes Svard. “They have a nice console with a digital snake and a clean rack. Although it’s not complicated, it gives Fellowship Bible Church a lot of punch and room for growth.” In addition to the sound reinforcement system, Audio Video Electronics also set up a new Vivitek d6010 6000 lumen projector and a 16- x 10-foot pearlescent Da-Lite snap-screen.

“I love that when I cluster the Danley boxes, they act like one large speaker,” said Svard. “Other manufacturers generate comb filtering and lobing, which can cause some nasty feedback when the cluster is above the pulpit. Danley doesn’t do that. Danley gives me excellent pattern control with uniform sound. The clarity of a Danley box is unmatched, in my opinion.

“The low-end at Fellowship Bible Church is tremendous. We had a few of their new DBH-218s at a much larger, 5,000-seat church in Tulsa, Oklahoma, and they were great. We arranged Fellowship’s two DBH-218s to give some directivity to the low end, which gives them nice on-stage volume and ample bass in the seats. In all, we gave them a premium system all the way across, from the console, to the amps, to the loudspeakers and subs. They’re very happy with it.”