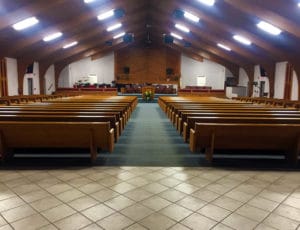 Great Lakes Christian Church in Warren, Michigan has been in its beautiful 500-seat sanctuary for nearly forty years. Its outlook and services are decidedly traditional, with music performed by an all-volunteer orchestra of musicians from 17 to 76 years old. As it slowly became clear that the original sound reinforcement system’s many problems would be solvable with a new system, the Great Lakes Christian Church members came up with a cost-effective plan to install a new system by performing much of the labor themselves. Regional AVL integration firm Advanced Lighting & Sound, of Troy, Michigan, assisted with the design, installation, and commissioning, settling on Danley Sound Labs loudspeakers for their famously natural reproduction.

“The main speakers were installed in 1980 as part of the original build of the facility. We changed mixing boards three times over the years and added/subtracted other equipment such as equalizers, compressors/gates, etc. attempting to improve the sound,” explained Terry Scott, long-time Facilities Manager at Great Lakes Christian Church. “It had a lot of hot spots that were too loud and dead spots that were too quiet. Over the years, we attempted to fill in the dead spots with supplemental loudspeakers, but it didn’t work too well.” 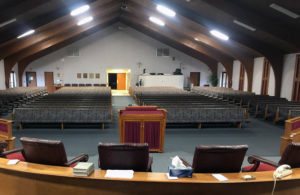 “Terry realized that if they simply replaced their existing loudspeakers with other ‘music store’ loudspeakers, they’d just be going sideways,” added Bob Minchella, co-owner of Advanced Lighting & Sound. “The Trustees trust Terry, but the question was, how could the church afford something of higher caliber? We at Advanced Lighting & Sound had worked with Terry and the church over the years, mainly repairing items when needed. They trusted us, and so together we came up with a design and a plan that would allow Terry and a group of church volunteers to do as much of the work themselves as possible. We would only come in for the very specialized work of, for example, terminating wires, performing the overall EQ of the system, and actually flying the loudspeakers.”

Minchella continued, “Given their emphasis on natural reproduction, Danley’s patented Synergy Horn technology seemed like the obvious choice for Great Lakes Christian Church. We did a Danley install at Meadow Brook Theatre, which is associated with Oakland University here in Michigan. It’s part of the music department, and several music professors stopped by while we were tuning the system. They were confused because it sounded like a live orchestral rehearsal! It sounded that real! For Great Lakes, we modeled the room using Danley Direct modeling software to choose the ideal Danley boxes given the shape of the room and the best places to hang loudspeakers. That also gave the church Trustees confidence in our design.”

The final mono system uses two Danley SH96HT loudspeakers for left and right coverage of the majority of the pews, with two Danley SH95HOs set further back in the sanctuary for delays. The ushers, who sit against the back wall, are especially appreciative of the new system’s intelligibility. In addition, three Danley Go2 8CX loudspeakers fly above the stage to act as monitors, with four 6-inch-cube Danley Nanos serving as orchestral spot monitors. “The musicians were impressed by the Nano’s very natural near-field sound,” Minchella noted. Crown XT amplifiers power the system, and a new 96kHz Allen & Heath SQ-7 console gives the church modern digital convenience and sound quality. New wired Earthworks microphones and Shure ULXD wireless microphones complete the package.

“Our new Danley system sounds great!” enthused Terry. “We’ve gotten a lot of positive feedback from the congregation.” Minchella added, “It’s tempting for churches to fall into a ‘race to the bottom’ with new technology, falling for the least expensive product because the advertising makes it seem like a win-win. But when the church can actually hear the difference, they make different decisions. Great Lakes Christian Church did a nice job of finding the right technology along with a way to make it happen on a budget. As a result, they now have a system that is remarkably articulate and even from front to back and from side to side. It’s got plenty of gain and is very predictable. They’re overjoyed!”