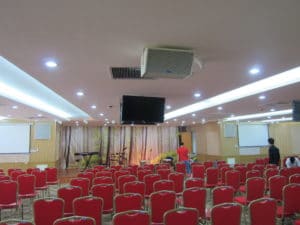 The Hanoi International Fellowship (HIF) is a non-denominational church serving both expatriates and nationals in Hanoi, Vietnam. It draws together a congregation of over four hundred people, representing over forty nationalities. Because many of its members are itinerant or transient diplomats, students, and employees of NGOs, international businesses, and the like, HIF’s congregation turns over more rapidly than the congregations of most churches. HIF recently moved to its first permanent building, and its challenging acoustics demanded exceptional pattern control from its new sound reinforcement system. Singapore-based Soundsmith Solutions Pte. Ltd. designed the new system using Danley Sound Labs SM-80 and SH-micro loudspeakers and TH-mini subwoofers.

The new sanctuary seats just over two hundred people, and HIF’s services are punctuated by a full band playing contemporary music. “Previously, the congregation met at a local 5-star hotel, and the hotel provided them with the usual hotel sound system,” said Pastor Jinggoy of Hanoi International Fellowship. “That system was uneven. It was too loud toward the front and inconsistent throughout the rest of the room. The subs were boomy and the high-end was harsh.” In addition to designing the system, Soundsmith Solutions also supplied the components. Pastor Jinggoy helped coordinate the church’s own contractors to install the system based on Soundsmith Solution’s drawings and specifications. 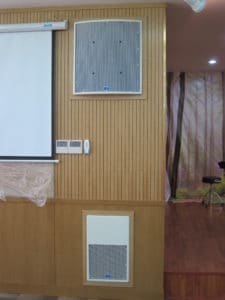 Edwin Ng, project manager at Soundsmith Solutions Pte. Ltd., commented, “The big challenge in the new space was its very low ceilings. Moreover, it used to be a warehouse, so none of the walls were designed with acoustics in mind. The challenge was compounded by the fact that there were few places to position loudspeakers that wouldn’t interfere with sight lines. The Danley Sound Labs boxes were a very fitting solution due to their low profiles and their exceptional directivity.” The goal was to keep energy on the congregants and off the walls.

Inputs to the system collect at an Allen & Heath GL2400-424 console, which outputs to a Xilica XP8080 digital loudspeaker management processor. In turn, the processor outputs to QSC RMX 4050HD and RMX 5050 amplifiers. Those power two Danley SM-80 loudspeakers that provide main coverage, six Danley SH-micro loudspeakers that serve as delays, and one more Danley SH-micro that fills in the center front. “The SM-80s were ideal loudspeakers for the mains because they are so slim and could be mounted into the wall without any trouble,” said Ng. “Both the SM-80 and the SH-micro are highly directional, which was great for these low ceilings. The sound goes where it is supposed to go and nowhere else! Importantly, that directivity extends down to 400Hz. Moreover, the Danley tone is natural and not at all fatiguing.”

To provide low-end support for the system, Ng included two Danley TH-mini subwoofers, which the installers mounted into the front wall below the SM-80s. “The TH-mini has to be the smallest but loudest sub I’ve ever heard,” he said. “The amount of bass coming out of this box when properly powered is nothing short of amazing. Subjectively, every bass note is tight and punchy.”

He continued, “All together, the new system is way, way better than the system they used at the hotel. Everything sounds clear, crisp, and pleasant to the ears, and it doesn’t matter where you sit. The whole room is evenly covered. Even when the microphones are placed right underneath the center fill Danley SH-micro, there is no feedback. Hanoi International Fellowship couldn’t be happier.”