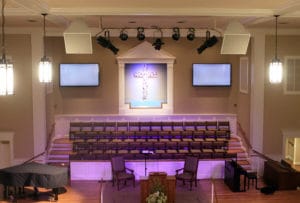 As it approached its hundred-year anniversary as a congregation, Highland Park Baptist Church in Columbia, Tennessee sought to revamp its four hundred-seat sanctuary. It hired Church Interiors of High Point, North Carolina to help design and organize the work, which included structural and aesthetic improvements, as well as a new Sharp/Extron video system based around three huge LED screens and a cutting-edge sound reinforcement system. Now, Danley Sound Labs horn-loaded loudspeakers and subwoofers deliver musical and highly intelligible sound, with power and processing supplied by rock-solid Ashly Audio amplifiers and digital signal processors. The sound system is zero compromise, exceeding Highland Park’s hopes for fidelity and quality while still meeting their budgetary requirements.

“Highland Park’s old sound system had an undersized sixteen-channel board and frustratingly uneven coverage,” explained Wayne McKinney, sales engineer with Church Interiors. “They have solidly traditional services with a strong choir, piano, and organ, but they’re looking to incorporate more contemporary elements. They needed the new sound system to deliver better coverage and intelligibility for their existing program material and to facilitate (and not hinder) their anticipated growth.” Although McKinney was able to repurpose or reuse some of the old system’s components, such as a CD player, a CD recorder, and several up-to-date wireless microphones, most of the system had to be replaced. 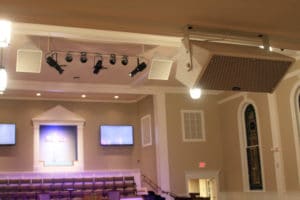 “We ran several models and found that Danley loudspeakers and subs gave us much better coverage with significantly fewer boxes than the alternatives,” continued McKinney. “The performance would be better, particularly in terms of pattern control, and the cost would be lower. You can’t beat that. Moreover, the fewer Danley boxes give an overall cleaner look. It’s neat and tidy. Because the sanctuary has an over-balcony and an under-balcony, we used a delay system to supplement the main cluster.” Two flagship Danley SH-50s provide main seating coverage from above the stage, with a Danley TH-118 subwoofer mounted in the organ chamber for low-end support. Two delayed Danley SH-Micros cover the lower balcony while three cover the upper balcony.

Two Ashly 4.8SP four-by-eight Protea™ DSP system processors handle the output from an Allen & Heath GLD 112 console to deliver the perfect dynamics and frequency domain characteristics for the Danley loudspeakers and subwoofer. Six dual-channel, 1,000-watt-per-channel Ashly KLR-2000 amplifiers and three dual-channel, 1,600-watts-per-channel Ashly KLR-3200 amplifiers power the system. “I’ve been a fan of Ashly processing and power for over twenty years,” said McKinney. “They’ve always maintained excellent build quality and always come through with knowledgeable, fast customer service. The Ashly KLR-Series amplifiers give the Danley system the punch it needs at a very competitive price point. The Ashly processing is super easy to use, and all of the algorithms are transparent.”

With its newly renovated sanctuary up and running, Highland Park Baptist Church is well positioned for its next century of service.