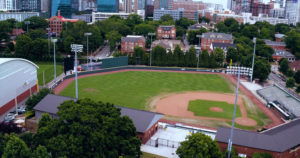 Georgia Tech fields a mean team of Yellow Jackets baseball players that has posted numerous NCAA Division I conference championships. The team practices and plays all of its home games at Russ Chandler Stadium, a 4,000-plus seat stadium originally built in 1930 and massively renovated in 2002. Like everything on the Georgia Tech campus, Russ Chandler Stadium is nestled deep inside Atlanta’s Midtown area, which adds urban excitement and a great skyline view… but also the specter of noise complaints from nearby classroom buildings and businesses. Gainesville-based A/V firm dB Integrations recently gave Georgia Tech two Danley-based sound systems for Russ Chandler Stadium: one for game day that includes a beefy Danley SH96HO loudspeaker and an even beefier Danley BC415 subwoofer and one for practices that uses a more modest Danley OS80 weatherized loudspeaker. Danley’s legendary pattern control maximizes sound where it needs to be and minimizes sound everywhere else.

“The Yellow Jackets had a dated sound reinforcement system mounted on a 25-foot tower behind center field,” explained Ronnie Stanford, director of sales and marketing at dB Integrations. “The audio quality was poor, and the system had zero low-frequency extension. The situation called for a complete redo, and we were careful to build game-day and practice systems that would help the team avoid noise complaints. In addition, we designed and installed a whole new front end in the press box, along with simple practice control from the home dugout.”

He continued, “The Georgia Tech facilities managers were already familiar with Danley Sound Labs because they heard a demo for the football field a few years ago. They didn’t want to mess with a distributed system – they wanted high fidelity, great intelligibility, and solid punch from the center field tower. Danley boxes pack a lot of output into a small frame, which allowed the Yellow Jackets to hit a budget and minimize the system footprint while still meeting all of their objectives.”

All 4,000-plus seats stretch from approximately first base to approximately third base, and a single Danley SH96HO mounted on the old tower hits all of them perfectly with minimal spill above or to either side. The Danley BC415 subwoofer also provides significant low-frequency power and (incredibly) directivity, which again helps satisfy the close-quarters requirements for the stadium’s new system. Two Danley DNA 20k4 Pro amplifiers – one for the SH96HO and one for the BC415 – each deliver four 5000W amplifier channels with comprehensive DSP and custom presets for the boxes. In the press box, four new Shure ULXD wireless receivers paired with handheld microphones feed an Allen & Heath SQ5, along with various playback devices.

“The computer science building is just behind the bleachers, and even with the new Danley boxes, a fair amount of low-end energy makes its way there,” Stanford said. “When the tower system is on, there’s no doubt it’s on. So that the team could still enjoy practicing to music without bothering students and faculty in the computer science building, we installed a totally independent practice system.” The practice system uses an iPhone jack and a volume knob in the dugout to feed a Danley OS80 weatherized loudspeaker. Stanford positioned it at the back of the stands behind the visitor dugout behind the first base side. “Now the field is nicely covered without disturbing the neighbors at all,” Stanford concluded. “In addition, the coaching staff was excited with the performance of the speakers and their ability to cover essential areas of the field for practice sessions.”