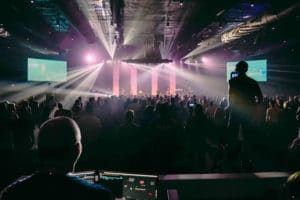 Now celebrating its twenty-sixth year, Grace Family Church started with just eighty people in a former jazzercise storefront next to a bar in Tampa, Florida. It has subsequently grown to over 12,000 members! To accommodate so many members, Grace Family Church operates satellite campuses. Its sixth campus opened in Land O’ Lakes, a suburb of Tampa, and AVL firm All Pro Integrated Systems, of Pensacola, Florida, helped design and install the AVL system there. Since many of the decision-makers at Grace Family Church had never heard a Danley Sound Labs system, All Pro arranged for a demo that proved persuasive. The now-finished system includes Danley’s patented point-source Synergy Horn loudspeaker technology, its patented Tapped Horn subwoofer technology, and seven Danley multi-channel amplifiers with built-in DSP and presets for every Danley loudspeaker and subwoofer. Perhaps in the spirit of its origins, the Land O’ Lakes campus is built into a former big box store… but instead of just eighty, it can accommodate 1,000 people!

“The church involved us early on, which gave us the opportunity to make suggestions for exactly how they would position the new interior walls to optimize the acoustics,” explained Mark Salamone, veteran engineer and sales manager at All Pro Integrated Systems. “They also started thinking about loudspeaker and subwoofer selections early on. They have entirely different systems in their various satellite locations. Although a handful of folks involved in the decision making had heard a Danley system before, most hadn’t. Given their need for high output, musicality, and intelligibility, we felt Danley was the right choice. However, before they were willing to commit, they sensibly asked for a demo.” 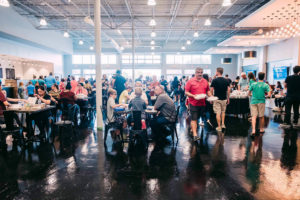 Chris Bencsik of Bencsik Associates, the area Danley rep, brought a pair of Danley SH96 loudspeakers and a Danley TH118 subwoofer to A/B against the system that everyone involved was used to in Grace Family Church’s main sanctuary. “Everyone was walking around, impressed by the clarity of the Danley system against their usual system,” Salamone said. “But I really wanted to drive the point home. Pastor Allen DiStefano walked up to me and said, ‘yeah, it sounds really good.’ I asked him if he had any music in his car that he was more familiar with, and he came back with an Eagles CD. When everyone heard that through the Danley system, there was no comparison. His eyes lit up. Everyone’s eyes lit up.”

With a deep history in recording and mix engineering, Salamone’s ears are well-calibrated. “Much more so than other sound reinforcement loudspeakers, Danleys are very accurate and detailed. They sound more like studio monitors than sound reinforcement boxes. When we put on the Eagles, I pointed out how you could hear around the guitar strings with the Danleys. You could hear inside the music. You could hear the details of the production. Then when we went back to their usual system, all of that accuracy was gone. There was no comparison. The Danley low end is also very accurate and detailed. With a Danley sub, we can really equalize specific low-end frequencies. Putting a boost at, say, 40Hz really affects 40Hz and not just a wash of low frequencies like you would get with other subs.”

“They’re already thinking about replacing the existing systems at their other campuses with Danley boxes,” Salamone said. “It’s hard to go back to a conventional system after you’ve heard a Danley system!”