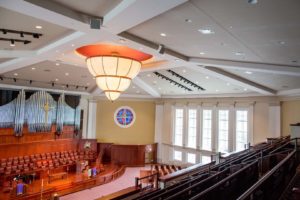 Since the completion of its expansive, 1,750-seat sanctuary in 2013, Johns Creek United Methodist Church has become a destination not only for its members but also for the public at large. Its lush, long reverberation makes an ideal setting for musical performances of all types, from symphony orchestras to contemporary bands to solo concerts on its massive pipe organ. The church is part of what earned Johns Creek – a northeastern suburb of Atlanta, Georgia – its top-ten spot in USA Today’s 2017 “50 Best Cities to Live In.” Unfortunately, the sanctuary’s long reverb time also made for lousy intelligibility –that is, until dB Integrations, of Gainesville, Georgia, designed and installed a new Danley Sound Labs sound reinforcement system. Acoustician Tom Danley’s patented technologies allow Johns Creek UMC’s two Danley SBH10 column-form, point-source loudspeakers to deliver phase-coherent audio to the seats, with remarkably little energy splashed on the walls. 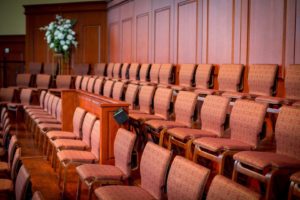 “The space itself is large: 150 feet wide by 100 feet deep, with a 40-foot balcony that spans the room,” explained Ronnie Stanford, director of sales and marketing at dB Integrations. “They had some column-form loudspeakers in there that had poor pattern control and not enough throw to make it to the back of the room. With an RT60 of 4.4 seconds and the poor pattern control of the existing loudspeakers, the overall intelligibility in the room was extremely low. The church originally contacted us with the hope that we would treat the room acoustically. However, Danley’s steep pattern control can improve these kinds of situations by keeping energy off the walls and ceiling and thus reducing the reverb generated by the sound reinforcement system. So instead of messing with the acoustics, which would hurt the room’s musicality, I suggested instead that we explore replacing the sound reinforcement system with Danley boxes.”

The services at Johns Creek UMC are fairly traditional, and the sound reinforcement is used primarily for speech and for amplifying the choir to mix well with the pipe organ. dB Integrations arranged a demo to show the church’s committee what a difference Danley pattern control could make. They brought in a single Danley SBH10 column-form, point-source loudspeaker, raised it up to fourteen feet on a lift, and tilted it down five degrees. “All fifteen members of the committee were there,” Stanford said. “We had 75% of the room covered, plus or minus 3dB front to back. They were all walking around, marveling at how clear and articulate it was. We even had solid intelligibility under the balcony!”

The completed system uses two Danley SBH10s, one on either side of the room and tilted in so that their patterns just miss the walls on either side. Three Danley SM100 loudspeakers cover the upper balcony, and just two diminutive Danley Nano loudspeakers provide monitoring for the choir.

At the request of the church, dB Integrations provided simple control of the system through a touch screen installed at mix position. The touchscreen is a control interface for the QSC QSYS CORE 110f control platform that serves as the primary processor for the audio system. The QSC CXD4.5Q-NA and CXD4.2Q-NA amplifiers used to power the loudspeakers are included in the QSYS network to create a seamless system.