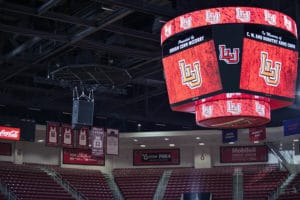 Lamar University serves 15,000 students on its Beaumont campus in southeastern Texas and one of the biggest sports on campus is basketball. Their basketball team, the Cardinals, has played in eleven NCAA tournaments. Now over thirty years-old, the 10,080-seat Montagne Center hosts all of the Lamar Cardinal’s home basketball games, as well as graduation ceremonies, athletic banquets, rock concerts, and touring entertainment. Until recently, it was limping along using the original sound reinforcement system that came with the building. Those forty-plus boxes have now been replaced by a single Danley J1-94 Jericho Horn and five Danley SM-80 full-range loudspeakers for fill.

“The old system lacked fidelity, coverage, and intelligibility, all of which was compounded by the fact that boxes were failing,” explained Chase Daigle, system designer at Beaumont-based MSC Systems, the firm that designed and installed the new system. “We worked with Kim Comeaux at Anderson Sales & Marketing, the regional Danley rep, to come up with a design that would provide even, impactful coverage with excellent intelligibility.”

The best solutions centered on a single Danley J1-94 Jericho Horn, the same box that lights up some of the biggest football arenas in the world. To provide proof of concept, Daigle and Comeaux arranged a J1-94 demo. They brought the J1-94 to the Montagne Center’s concourse level and played program music and live spoken word so that all the stakeholders could experience Danley fidelity in the very place it would be used. “They were really impressed by both the clarity and the honest, powerful low-frequency content of the J1,” Daigle said. The demo secured the job. 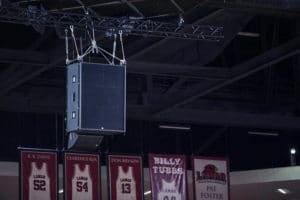 Now fully installed, the Danley J1-94 Jericho Horn fires from above the far side of the court, providing coverage of the floor, both near sides, and the opposite far side. Four Danley SM-80s cover the stands behind the J1-94, as well as the floor directly beneath the cluster. Finally, a fifth Danley SM-80 fills the shadow created by the mid-court scoreboard. Three Danley DNA 20K4 Pro amplifiers together provide the twelve channels of 5000W power needed to run the system, as well as all of the onboard processing necessary for signal conditioning, loudspeaker conditioning, and preset controls.

A new Soundcraft Si Performer digital console controls the system and provides output via Dante to the Danley DNA amplifiers. Two patch panels – one at center court and one at the rear of the court – join new Shure wireless microphones, DPA headset and new Earthworks microphones as inputs capable of handling everything from a simple lecture, to a full basketball game, to a rock concert, to you name it! Daigle noted that configuring the Dante between the Soundcraft console and the Danley amplifiers was straightforward and worked perfectly on the very first try. Daigle also gave the Lamar University staff a custom control panel that allows them to select from several presets: the entire system with a separate mix for down-fill, stage monitor for basic events and just the fill loudspeakers for smaller events (with the Jericho Horn only outputting bass).

After a very successful installation and a great experience with MSC Systems and the Danley boxes, Lamar University is looking forward to using Danley on other projects.

“I was very impressed with every single piece of Danley product installed. Danley has really opened my eyes to what they are doing. I’m highly impressed with Danley and look forward to working with them in the future,” added Clint Burges, director of video operations.