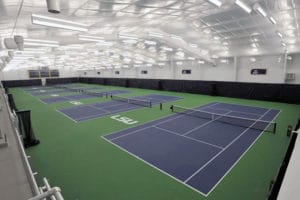 Affectionately known as “Death Valley” for the fate the visiting team so often meets, Louisiana State University’s 102,000-seat Tiger Stadium has been running a Danley Sound Labs sound reinforcement system for the past two seasons. Notable for the massive output of its Danley Jericho Horns, which successfully compete with the legendary roar of Tiger fans, the system is also remarkable for its clarity and musicality. With enthusiastic support from fans, staff, and administration, Terrance Bold, LSU’s assistant director of facilities and grounds, has subsequently made it his mission to bring all of LSU’s other athletic facilities up to the same standard. To date, LSU has installed Danley systems at its softball field, indoor track, swimming facility, and indoor and outdoor tennis facilities, and Bold is slated to place another Danley system in LSU’s gymnastics facility very soon. For most of those new systems, Bold also upgraded the amplifiers and processors to Ashly Audio, citing their proven 24/7 reliability. 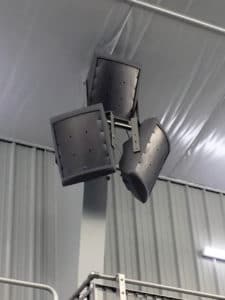 “I want every facility at LSU to be a miniature version of Tiger Stadium,” Bold said. “Everyone is in love with that system! It’s got plenty of SPL. Other loudspeakers at that volume would be irritating, but Danley’s sound is so smooth and undistorted it remains completely enjoyable. Our fans leave the stadium feeling great – assuming the Tigers won!” Bold’s background is in audio engineering and live mixing, and he’s the guy behind the console for all LSU home football and basketball games. Moreover, he’s a passionate audiophile who wants LSU fans to get the same kick out of their listening experience on game day that he gets listening to his tweaked hi-fi at home. Richard Hale, president of local A/V integration firm Sound Advice, and various members of the Danley team have assisted Bold in his quest to redo LSU in the sonic image of Tiger Stadium.

“It used to be – and to a certain extent still is – a hodgepodge of systems and manufacturers across our facilities,” Bold said. “In my experience with Danley, I’ve come to learn that all Danley loudspeakers, big and small, have a characteristic sound. It’s a relaxing sound that doesn’t blow your ears out, and every kind of music comes out sounding great. I’m amazed that whether I’m close to a Danley loudspeaker or far from it, the SPL stays relatively constant and it’s possible to have a conversation no matter how loud the system is. Danley also excels at making spoken word intelligible, and that’s obviously important at a sporting event. Given all of those huge advantages, it makes sense for us to raise up our other venues with that same great Danley sound.”

Although some budget constraints necessitated the reuse of existing amplifiers and processors, Bold is taking every possible opportunity to put Ashly KLR-Series amplifiers and ne24.24M modular-output processors behind the new Danley loudspeakers and subwoofers. “Years ago, we put an Ashly system into our basketball arena,” he said. “It’s the most work-horse system I have, with gymnastics meets, men’s basketball, women’s basketball, and anything the university throws at us. We beat those Ashly amps and that Ashly processor on a near-daily basis, and I haven’t had a single ounce of service or failure on them.”

LSU’s brand new tennis facility features six indoor and twelve outdoor courts with seating for 550 fans. Bold jumped at the opportunity to outfit it with Danley loudspeakers and Ashly amplifiers and processors. Indoors, he placed three clusters, each composed of a Danley OS-115 subwoofer above two Danley OS-90 loudspeakers, equally spaced along the east wall. Outdoors, he placed a total of eight OS-115s and eight OS-90s from light poles on the center aisle between two rows of tennis courts. “It sounds outstanding, and there’s not a dead spot anywhere,” Bold said. “It has the same clarity and beautiful midrange as the Tiger Stadium system, and it’s completely weatherproof! It’s hard to imagine getting that kind of performance out of any loudspeaker and subwoofer combination, let alone one that can stand up to all kinds of weather.”

Bold pulled out underperforming systems in other existing venues and replaced them with Danley systems. LSU’s softball facility chucked thirty-two loudspeakers in favor of two Danley OS-90s, which deliver significantly greater total output with greater clarity. The indoor track uses a center cluster of four Danley OS-80s along with existing subwoofers and new Ashly amplifiers, and the improvement to intelligibility is obvious. LSU’s indoor swimming complex now uses six Danley OS-90s, new Ashly amplifiers, and, given the room’s impossible low-end reverberation, no subwoofers. In the near future, Bold will replace the sound system in the gymnastics facility with four Danley SBH-20LF full-range loudspeakers and two TH-118 subwoofers, along with new Ashly KLR-Series amplifiers.

One might guess that Bold’s mission would be resisted by his necessarily budget-minded higher-ups, but satisfaction with LSU’s growing Danley sound has been so thorough that everyone is pushing to find a way to keep the momentum going. “No one is complaining because each new Danley and Ashly system is a complete knockout,” he said. “I showed one of the new systems to our board of supervisors and they left the demo giving me high-fives!”