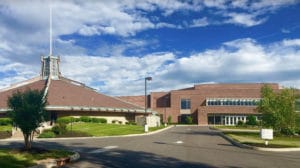 It’s not uncommon these days for traditional Baptist churches to gradually incorporate contemporary elements, until eventually the day comes when their services are no longer “traditional.” That’s not the path that Manley Baptist Church in Morristown, Tennessee took! Instead, Manley Baptist moved from its traditional sanctuary to a brand new 2,000-seat fan-shaped sanctuary and immediately switched over to a more contemporary service format. With that switch came big expectations for modern sound reinforcement – but only a modest budget with which to realize them. A/V integration firm All Pro Sound of Pensacola, Florida met (and even exceeded!) those expectations within the budget by designing and installing a sound reinforcement system around Danley Sound Labs loudspeakers and subwoofers.

“Manley Baptist came to us with aspirations for a first-rate sound reinforcement system, but since they were also building the entire sanctuary from the ground up, the budget for sound reinforcement was pretty tight,” explained Jon Giles, national sales manager for All Pro Sound. “We went back and forth to work out a solution that would meet their high expectations within budget. They started out with the not-uncommon misconception that line arrays are the beginning and end of a modern sound system. We showed them that Danley’s point source solutions offer superior fidelity and great pattern control for less money than even an inexpensive line array system.” 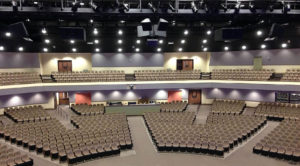 “Pattern control was key at Manley Baptist,” agreed Bobby Taylor, vice president of business development at All Pro Sound. “Danley’s unique designs control frequencies that are octaves lower than conventional boxes can manage, which allowed us to concentrate the sound on the seating while minimizing intelligibility-killing reflections from the walls and ceiling.”

“The sound at Manley Baptist is fantastic and put them right where they wanted to be,” said Giles. “Manley’s contemporary services have all of the impact you would expect from a high-quality concert – exactly what they were hoping for – and we managed it for a fraction of the cost of a line array.”

Find a Distributor
By clicking the “Accept” button, you consent to the use of all cookies on your device to give you the best site experience. Do not sell my personal information. Accept Cookie Settings
Manage Cookie Consent