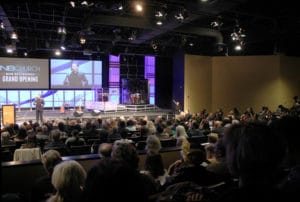 In response to tremendous growth, New Beginnings DFW Church in Bedford, Texas purchased a former ten-screen Cineplex and converted it to a stunning sanctuary for contemporary worship. Its high-energy services, complete with a full band and plenty of vocalists, benefit from the simple, but tremendously powerful Danley Sound Labs loudspeakers, subwoofers, and amplifiers that Jeff McLeod at Church Audio Video designed and installed.

“It’s a big space, and we needed to fill it with musical, intelligible sound,” said McLeod. “Clarity is everything, and Danley has a proven record of delivering products that are well-articulated and powerful. We gave them a left-center-right system that would convey all of the excitement and invite all of the immersion that their energetic services deserved.” 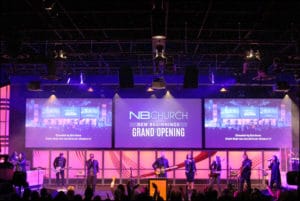 The choice and arrangement of Danley loudspeakers and subwoofers is characterized both by its simplicity and by its tremendous horsepower. Two Danley SH-96 loudspeakers form the left and right elements of the system, and a close-packed pair of Danley SH-46s form the center channel. Two additional SH-96s provide delays for the wings of the sanctuary, and four beefy Danley TH-115 subwoofers convey high-fidelity bass from beneath the stage.

“Danley is well-known for making very honest, clear loudspeakers and subs,” said McLeod. “They’re clean, affordable, and great-sounding, and they don’t require a lot of signal processing voodoo to sound right. Danley’s simple design concept, paired with the right components, the right enclosures, and a great passive crossover, made for a simple point-and-shoot installation. A line array wouldn’t have worked at New Beginnings because there’s not enough ceiling height, but even if the height had been there, Danley’s point source system still sounds a lot better because it doesn’t have any phasing or comb filtering issues.”