Danley Sound Labs, maker of innovative loudspeakers and subwoofers that cleverly sidestep the trade-offs and constraints inherent in conventional designs, has applied that same “outside of the box” thinking to its latest loudspeaker and subwoofer installation design software. Named Danley Direct and available for free from www.danleysoundlabs.com, the new platform models the direct sound path from user-defined designs involving Danley products in three-dimensional spaces (which can be conveniently imported or modeled via SketchUp). Co-designed by renowned acoustician Doug Jones and Sebastian Rivas Godoy, Danley Direct is notable for its transparent cross-platform performance (Mac or PC), multiple-window flexibility, and tremendous speed. Like everything Danley Sound Labs puts its name on, Danley Direct is built on solid math and third-party measured loudspeaker and subwoofer data. 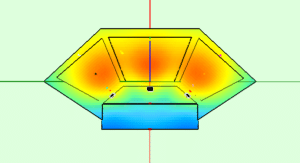 Danley Direct is heir to the capabilities of Danley’s DDT modeling software, which was one of the only loudspeaker modeling software programs to include subwoofer (i.e. < 100Hz) output. “When we were asked by Mike Hedden, Danley president, to update DDT, Sebastian and I realized that it had fully matured,” said Jones. “It would become unwieldy if we tried to build more capability on top of its existing structure. So we decided to start from scratch. We recognized that our new software had to be fast, and it had to let the user create his or her own work environment. It needed a powerful graphics engine that could keep pace with a quick-thinking designer.”

Jones and Godoy succeeded. Not only will Danley Direct operate on a Mac or PC with interchangeable files, it will do so with a fluidity that encourages exploration and creativity. The software supports multiple-window operation, and rendered objects can be rotated and otherwise manipulated without requiring re-rendering. “No other loudspeaker modeling software can do that,” stated Hedden. Jones added, “With that kind of speed and transparency, Danley Direct is not going to waste anybody’s time.” Because it uses the ubiquitous SketchUp as its drawing environment, it’s easy to create spaces either from scratch or by importing the numerous file types that SketchUp accepts (e.g. .dxf, AutoCAD). Of course, Danley Direct can import Danley DDT files, and, like DDT, Direct training will count toward CTS continuing education credits.

Although not nearly as flashy as its smooth graphics engine or its transparent workflow, Danley Direct’s underlying mathematics and the Danley product data that feed into it are honest and correct. That, of course, is of the utmost importance. “Danley has always supported third-party independent measurements,” said Jones. “The model you build in Danley Direct will be as close to the reality of the subsequent installation as any reasonable person could expect. This software is not designed to sell Danley products; it is designed to properly model them so that our users will have successful projects. And that is what will sell Danley products.”