What is “louder”?  Are some frequencies “louder” than others while measuring the same SPL?  Why does it sound different at different loudness levels?

Human perception is often different from technical measurements.  We will try to describe a few “whys” in this tech topic.

First of all, consider that there are a good number of “it depends” surrounding this subject, so that needs to be factored into any “kinda correct” answer.

Measurement gear is much more accurate than our ears, and can accurately qualify results, rather than subjective listening.  Test gear does not change response with level (unless it is overloaded of course).  Our ears also get overloaded and go into “self protect” mode, which changes the way things sound as well.

Our ears are most sensitive to “overall loudness” around the average or constant part of music vs the peaks.

If you listen to short duration bursts of high frequency tones, they appear much lower in level than they actually are (when measured).  That is because it takes time for our ears to perceive the actual loudness.

If the peaks are clipped or limited in level, we will not feel the loudness has changed, only the dynamic range or “openness” is reduced.

Consider that “average” music has around a 15-16dB range from the peaks to the average levels.

AMPLIFIER SIZE
More watts is louder-right?  Well kinda.  The average loudness more or less determines how loud we perceive it is.

Let’s say that you have an amplifier capable of delivering 2000 watts into your loudspeaker, and you are just barely tickling the limit, and the crest factor of your music is 16dB (typical).  That means that the continuous or “average” power delivered would be around 50 watts.   16dB=10log (2000/50).

But your amp breaks, and all your buddy has is a 1000 watt amp.  Half the power, should really affect the loudness-right?  Not really.  First of all, 1000 watts is only 3dB down from 2000 watts.  Since the amplifier can still easily produce 50 watts continuous, what are you missing?  You are just missing the very tops of the peaks of the signal.  If the amplifier has a decent limiter or clip eliminator, the “sonic experience” will be that the dynamic range is not quite what it used to be, so the sound is not quite as “open”, but will still be “just as loud”.  It depends on what is being expected or listened for.  A sound level meter on “slow” would not indicate any real change of SPL with regard to the change in amplifier size, assuming the gain of the amplifier was the same.

This “squashed” signal is what many people (streaming, broadcasts, producers, gear manufacturers etc) rely upon to make the music appear louder.  Just get the “average loudness up”, and don’t worry about reproducing the peaks.  A lower dynamic range is getting more and more “standard” these days, it is sad to say.  It is called “The loudness wars” and the music suffers because it is not as the artist originally recorded, but if it sells more, it is “better”, or so they say.

Does this affect the audience?  It depends.  Some people hate it, and others don’t care or even notice.  It partially depends on what a particular person is accustomed to hearing.

It is also a reason that live music often sounds much better than recorded music, it has a greater dynamic range and impact.  Unless of course the sound system is too small and is squashing the signal.

AT WHAT FREQUENCY?
Our ears are far from being accurate indicators of loudness.  As the following graph shows, not only do different frequencies produce different apparent “loudness”, the actual Sound Pressure Level affects how loud one frequency appears with regard to other frequencies.

As the levels get quieter, the differences get greater.  Notice how much louder the lower and upper frequencies need to be at low levels, in order for them to appear to be the same as higher frequencies.  This is why there was a “loudness” button on old stereos.  At low levels it provided a good bit of boost at the lower the higher frequencies, and as you turned the level up, it made less and less of an effect on the sound.  It got flatter, just like your ears do.

As the overall levels get louder, the response of our ears gets flatter. That means that the whole tone/balance of a mix will change at different Sound Pressure Levels.
Also notice that our ears are most sensitive around the 3, 4, 5KHz range.  At higher levels, this frequency range can be harsh or “bitety”, so it often needs to be pulled down to sound balanced. 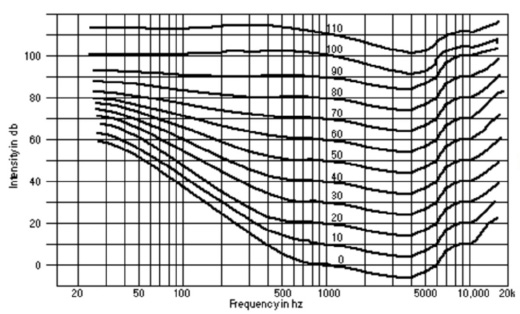 FREQUENCY BALANCE
The “balance” of frequencies has a lot to do with how we perceive what is loud.
Here is a quick fun test.  Take triamplified loudspeaker or speaker system. Preferably with xover points in the ranges of 100-300Hz and 1-2KHz, for the best effect.  Play some music and turn it up to a nice healthy (ie kinda loud) level, but not stupid loud or where it hurts.  So, “comfortably loud”.  Measure the SPL level if you wish-C or flat response, don’t use A.

Now mute the lows.  What do you perceive happens to the sound?  Obviously it is thin sounding.  Look at the SPL.  It is now quieter than it was before.  This is because the total SPL is a combination of all of the frequencies.  Simply put, there are less frequencies, so the total sound pressure is lower.  NOTE: This is not what happens, but makes for a simple understanding.  Actually ride on top of each other, increasing the overall loudness

Now mute the highs.  What do you immediately do?  You stick your fingers in your ears.  WHY?  Because it is “to loud”.  But yet your SPL meter shows that it is QUIETER than it was when it was run full range or when just the mid and highs were running.  Notice how your ear drums seem to be modulating with the music.  But yet, there is much less overall “modulation” going on, because there are no bass frequencies.

When the sound is balanced (lows to highs), we don’t feel that it hurts as much. This is how fire alarms work.  They consist of mainly high frequencies, to which our ears are most sensitive, and those frequencies tend to cut through other noise and get our attention.  If they were lower in frequency, the sound would be more pleasing, and would not get our attention.

In conclusion, “loudness” depends on a number of different factors, and sometimes things that we suspect will make a big change (like amplifier size), may not make as much of a difference as we would like to think.
While a 3dB reduction in amplifier size will mostly not change the “overall loudness”, a 3dB reduction in loudspeaker sensitivity will make EVERYTHING quieter. Likewise, doubling the amplifier size will not result in a noticeable increase in overall loudness (assuming the peaks are the only thing that is reduced), but a loudspeaker with 3dB greater sensitivity will make EVERYTHING louder.  Sensitivity in a loudspeaker is your friend.

Often we need to look a bit deeper into the subject to revel the correct answer.  Things are not always as they first appear to be.

The most accurate family of loudspeakers