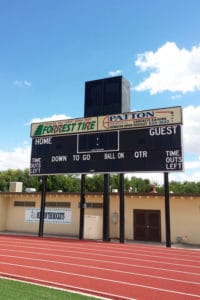 For too many years, football fans and supporters of Roswell Independent Schools in Roswell, New Mexico suffered the poor performance of small paging horns that squawked announcements no one could understand and that emitted music no one could feel. It was a sad, uninspiring, and yet not uncommon situation. When money finally became available to make improvements, the school hired local firm J&G Electric to oversee the project. Relatively new to the Pro Audio market, Mike McClain of J&G Electric sought, without bias, the very best sounding system for his client at the most reasonable price. A thorough search turned up Danley Sound Labs, and Roswell Schools now benefit from a pair of Danley GH-60 Genesis Horns for vivid full-range output and a pair of beefy Danley DBH-218 subwoofers for low-frequency support.

“The school gave J&G Electric free reign to choose the best audio system they could, given the constraints of the budget,” explained Noel Darby of DarbyReps (Denver, CO), who represents Danley in the Rocky Mountain Region and who consulted on the design. “They had heard great things about Danley – that Danley’s designs are uniquely efficient, natural sounding, and easy to work with. I’ve been selling loudspeakers for a long time, and I believe Tom Danley’s designs really are amazing. He’s not chasing the same old woofer/tweeter or line array concept.” 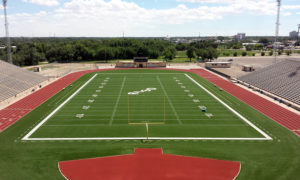 Given that the existing light poles are all behind the seating, it didn’t make sense to use a distributed system. Instead, Darby suggested an end-fired system that would split the field down the middle and provide equal coverage to the home and visitor seating. A Xilica XP-2040 2×4 processor handles modest input conditioning and system EQ, and feeds two Danley DSLA 3.3k and two Danley DSLA 6.5k amplifiers. Those amplifiers in turn power two Danley Genesis GH-60 horns and two Danley DBH-218 subwoofers mounted above and behind the scoreboard. The Genesis Horns use Danley’s patent-pending Paraline acoustical technology to gradually attenuate output at lower angles so as to deliver even SPLs to all the seats, near and far.

The install proved to be the largest hurdle to overcome. “With the original site being built in 1968, and seeing numinous additions and upgrades, we had our hands full,” said McClain. Trenching was tedious in order to avoid underground utilities and unknown paths, so we were forced to dig slowly and carefully. When it was all said and done we had over 700 feet of trench at four feet deep. In order to avoid the necessity of repeating the arduous process at a later date a second “spare” conduit was installed. Dealing with the harsh desert heat cooling the equipment was also an issue. To avoid building a structure to hold the equipment, we used a self-contained climate controlled rack to house the amps and processors. Using the assistance of a local fabricator the forty-foot tall structure holding the loudspeakers was built. “After all the sweat and heavy lifting the system worked as designed and as promised.”

Deward Timothy of Utah’s Poll Sound came in for the final tuning, which, by all accounts, didn’t take very long given the natural sound of the GH-60s and the fact that they are true point-source devices. “The school district is amazed at how much output they’re getting,” said McClain. “The coaches are ecstatic! This is a huge leap up for them, and the system will serve them well for a long, long time to come.”