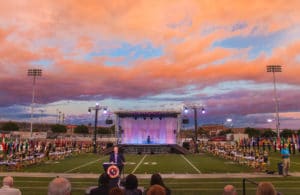 Taylor Sound is a small regional sound production rental house in St. George, Utah with the distinction of being among the first sound companies in the world to adopt Danley Sound Labs’ new Exodus Series. In keeping with Danley’s commitment to the superior fidelity and pattern control of single-point source loudspeaker designs but bowing to industry aesthetics and rider requirements, the Exodus Series is a modular system of single-point source loudspeakers that “hide” inside the form factor and aesthetic of a line array. Taylor Sound’s bread and butter jobs are the local community events and festivals of southwestern Utah, and Taylor Sound always delivers a top-flight production any time a national act comes through. Taylor Sound recently used its Danley Exodus system paired with a powerful Danley BC-415 subwoofer at the opening ceremony of the Huntsman World Senior Games, which involved live performances, pre-recorded content, speeches, and big dance numbers, as well as at a Howard Jones concert, where the system was put through its ‘80s synth-pop paces.

“I’ve been a longtime Danley user because the Danley sound (both full-range and low frequency) is so excellent,” said Dustin Taylor, owner and chief operator of Taylor Sound. “We were using Danley SH-96HOs and TH-118s, but then Danley opened up a whole world of possibilities with the Exodus system. All the hardware is built to fly, stack, and transport easily, and we can add more boxes as needed. It’s totally expandable. Because it’s so easy to fly, stack, and transport, it makes it possible for little guys like me to compete successfully with larger operations. The Danley Exodus system also has a really compelling aesthetic – like a line array but a notch cooler. Every client has been like, ‘wow!’ and they’re instantly on board.”

However, at the end of the day, it’s “Taylor Sound,” not “Taylor Aesthetic” and clients expect enveloping, high SPL, high-fidelity sound with rich, musical bass. “Like all Danley products, the Exodus system’s sound quality, efficiency, pattern control, and phase coherence are vastly better than true line arrays,” said Taylor. “We’ve received tons of compliments on the sound. Folks comment on the presence and clarity, saying it’s like they’re at home with their hi-fi. The Danley BC-415 subwoofer is also amazing and a great complement to the full-range boxes. It’s really clean and you can hear every bass note that’s played with perfect definition. I’ve had bass players turn their on-stage volume down because it sounds so good in the house.”