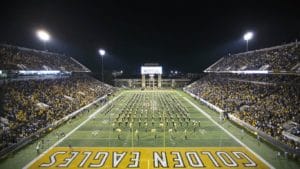 Known locally as “The Rock,” M.M. Roberts Stadium is home to the University of Southern Mississippi’s Golden Eagles football team. It originally opened in 1932 with 4,000 seats and has since expanded to hold 36,000-plus rambunctious Southern Miss fans. Its most recent expansion happened a decade ago, and although the expanded infrastructure and seating is in great shape, the sound reinforcement system that went in didn’t fare as well. After an overhaul installed by AV integration firm Sound & Communications, of Flowood, Mississippi, M.M. Roberts Stadium now commands a full Danley Sound Labs loudspeaker, subwoofer, and amplifier/DSP system.

“The old system didn’t stand up to the elements, and pieces of the speaker cabinets and components were failing,” explained Jeff Crowe, director of operations with Sound & Communications. “The coverage was going, the high end was going, and intelligibility was going. I talked with some friends who attended home games last year, and they said it sounded like Charlie Brown’s teacher – laughably unintelligible!” Larry Lucas of Anthony James Partners worked with USM’s Senior Associate AD for External Operations, Stephen Pugh, to design a system with superlative intelligibility and musical impact. “We were aware of Danley’s reputation in the industry and the commitment they have to quality and customer service,” Pugh said. “We spoke with past Danley clients and did some independent research, all of which convinced us that Danley’s reputation was earned. We felt that we had found the right fit.”

The sound reinforcement system at M.M. Roberts Stadium fires from above the scoreboard on the north end of the field and uses Danley’s powerful Jericho Horns to cover the majority of the stands. One highly-focused Danley J6-42 Jericho Horn fires across the field to the opposite stands, and two broader Danley J3-64 Jericho Horns cover the stands to either side. Additional Danley SH46 and SH96HO full-range loudspeakers provide fill for the stands and coverage for the field itself. A pair of beefy, directional Danley BC415 subwoofers fill out the low end. Finally, five 4-channel Danley DNA 20k4 Pro amplifiers deliver 100,000 watts to the entire system and handle DSP for loudspeaker conditioning via custom presets for every Danley loudspeaker and subwoofer.

“When we walked to the 50-yard line and fired up the system for the first time, the hair on my neck actually stood up because it sounded so good,” Crowe recalled. “Everyone I’ve talked to since has been blown away. Everything is crystal clear and intelligible, and the low-end response really makes the music come to life. You can literally feel it!” Pugh is equally impressed. “The reaction from our fans and management has been overwhelming,” he said. “It has overhauled our game day experience, and the quality and service we received from Danley was fantastic. The new system is an absolute success.”

Crowe was impressed by the build quality of the Danley loudspeakers and subwoofers: “Compared with the old boxes that came out – you could almost push your thumb through their exteriors – the Danley boxes look ready to withstand the rain and heat through years and years of southern Mississippi summers. USM can look forward to great sound for a long time.”