TIGHT ON SPACE AND MONEY, THE STEPHEN FOSTER STORY GETS BIG IMPACT AND STUNNING FIDELITY WITH DANLEY SOUND LABS LOUDSPEAKERS AND AMPLIFIERS 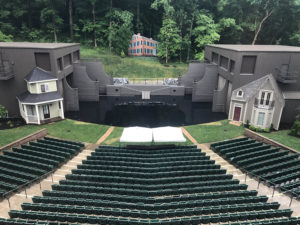 The J. Dan Talbott Amphitheatre in My Old Kentucky Home State Park has been staging The Stephen Foster Story since 1959, and millions of people have traveled to Bardstown, Kentucky from around the state, the country, and the world to experience it. The Broadway-caliber show typically runs from May to August and features a gigantic cast in the retelling of Stephen Foster’s story. Foster was one of America’s earliest composers. He wrote “Oh! Susanna,” “Camptown Races,” and “My Old Kentucky Home,” among many others, and the musical revisits pivotal moments in history through the lens of his music. When the stage was recently demolished and rebuilt, local AV integration firm JCA Media gave The Stephen Foster Story – along with all of the concerts and other theatrical works staged there – an awesome new Danley Sound Labs sound reinforcement system that delivers far better performance at significantly less cost than a comparable line array system. 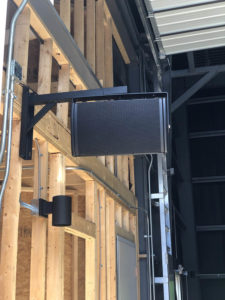 “After the 2017 season, the venue was condemned because the stage, which was open to the elements and many decades old, was literally crumbling,” explained Alex Peake, integration specialist at JCA Media. “The county stepped in to help save the show, and they patched things up for the 2018 season and began fundraising for a complete rebuild before the 2019 season. In May 2018, we were asked to quote a new PA system. They were tight on space and budget in the new design but they also had 800 seats that they had to cover with really high intelligibility. Although we had never spec’d a Danley design before, this seemed like the perfect fit.”

Peake had heard of Danley and already worked with Danley’s Kentucky-area distributor, Bob White Associates. “The first time I saw a Danley system, I said, ‘why did they go and hang a bunch of subs up there?’” Peake joked. “But hearing really is believing. Tom Danley’s innovative approach to designing loudspeakers is solid. We only had a six-foot by six-foot cavity on either side of the stage to put the loudspeakers in. That’s not enough vertical height for a line array given the raked, fan-shaped seating we had to cover. Moreover, a single Danley box per side could provide all of the coverage, and although a single Danley box isn’t cheap, you would need so many line array elements that an entire line array system would end up being way more expensive.” 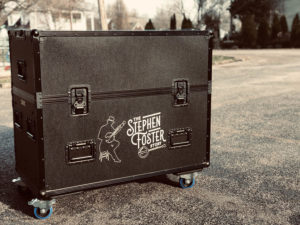 Demolition crews took out the old stage just one week after the final 2018 show. Not long after, the amphitheater had a new concrete stage with new drainage and metal buildings with integrated garage doors for protection from the weather. Peake worked with Skip Welch, Danley’s eastern regional sales manager, on the design. Although the owners weren’t ready to commit to subwoofers (which are really only needed for concerts since the Stephen Foster Story is not bass-heavy), Peake saw to it that the necessary wiring was in place to easily add Danley BC412 or DBH218 subwoofers at a later date. A stereo pair of beefy, fully-weatherproof Danley SH96HO full-range loudspeakers serve as mains. In addition, the stage uses six Danley GO2 8CX loudspeakers and four Danley Nanos for monitors, and eight additional Danley Nanos provide coverage on a veranda for background music and announcements.

A four-channel, 20,000-Watt Danley DNA 20k4 amplifier powers the mains, and two four-channel, 5000-Watt Danley DNA 5k4c amplifiers power the monitors and veranda loudspeakers. “We used the DSP presets for each Danley loudspeaker model that ships with Danley amps,” Peake said. “They were great starting points, and because the amphitheater is outside and reflections aren’t an issue, we didn’t need to make very many changes at all. In fact, I think we only took out a dB or two near 250Hz. Tuning was simple.”

For full productions, park technical staff run the show from a new Allen & Heath dLive C3500 digital console with a CDM64 MixRack. The console is in a rolling case that requires just a plug for power and a plug for audio, which reduces their setup time from 1.5 hours to just three minutes. For simpler events that require only a few live microphones, Peake gave the director an Allen & Heath IP8, an eight-channel remote control for the dLive system with motorized faders. Multiple-location Furman sequencing allows the system to power up from multiple locations and, importantly, permits the director to control the system from the IP8 without involving the console at all. The dLive integrates with twenty-four Shure QLXD body-pack systems so that the battery life is visible on each channel and the RF level can be controlled right from the console. 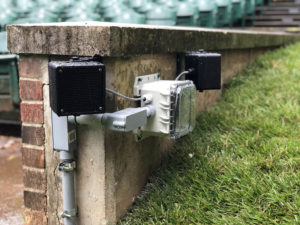 “They’re in heaven,” Peake said. “They were skeptical at first because the Danley approach is so very different from what everybody else is doing, but they’re Danley fans now, through and through. The coverage and intelligibility are perfect. You can walk from the first row towards the stage and the pattern from the SH96HOs immediately drops off. Everyone who I know personally who has gone to see the show since the upgrade have had great things to say!”