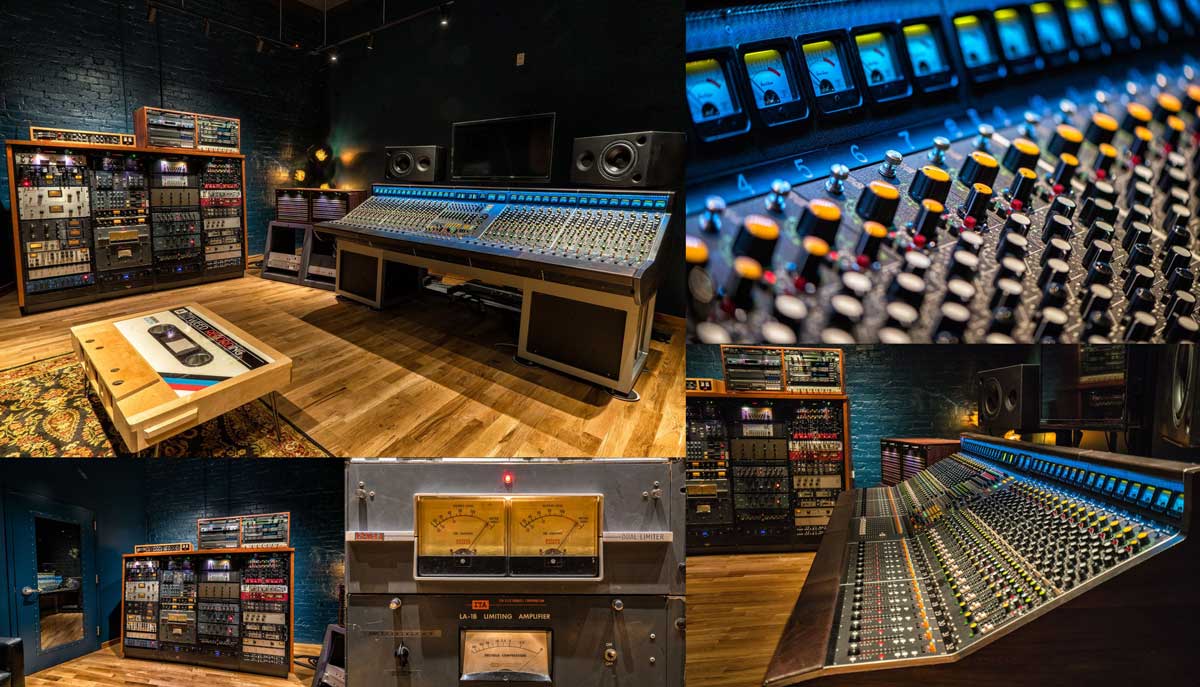 Tweed Recording is the lifelong project of engineer, producer, and musician Andrew Ratcliffe. An impassioned devotee of pro audio gear with organic soul, Ratcliffe founded Tweed Recording in Oxford, Mississippi in the 1990s and has been amassing gear that sings ever since. After successfully running the facility as a commercial studio, Ratcliffe felt called to give back to the next generation of audio professionals. He relocated Tweed Recording to Athens, Georgia and built out a new three-room facility that replicates the best parts of his old Oxford location, along with a classroom and a one-hundred seat live performance venue. Reflecting his love of soulful gear, Ratcliffe selected Danley Sound Labs loudspeakers for the classroom and the live performance venue. In addition, while he was selecting those models at Danley’s Gainesville, Georgia production facility, he also heard prototypes of Danley’s new nearfield monitors (a departure from the company’s live sound focus). Recognizing a gem when he hears it, Ratcliffe installed three sets of Danley Studio 2 self-powered monitors, one for each control room.

“Tweed Recording is dedicated to educating our students for success,” Ratcliffe said. “Our students definitely learn a lot about the technical aspects of professional audio, like what microphones to use, how to compress a vocal, gain structure, and so on. But they also learn important business aspects framed around intellectual property rights. These lessons prepare students to make a living freelancing, to own a studio, production company, or record label, and to monetize all of these in today’s creative economy. And they also learn the all-important psychological angles to the business: you may know all of the technical aspects of recording, but if you can’t coax an inspired performance out of five crazy musicians, you’re going to be in trouble! Athens is a great place for the music and film communities – it embraces cool and it embraces weirdness. I was able to assemble a first-rate team of Grammy-winners, producers, engineers, and music industry professionals to support the school, write the curriculum, and provide instruction.

Ratcliffe started an equipment company alongside his studio and is a part-owner in the newly revitalized console company, Sound Techniques.  The equipment company always gravitated toward vintage gear with a lot of personality. He worked with integration firm TSAV to help bring all of the technologies in the facility together, including Dante, Internet, Wi-Fi, and more. “They suggested I check out the Danley line for the theater, so we went to Gainesville for the day to hear what Danley had to offer,” he said. “We were impressed by the people at Danley and their unconventional approach to high-fidelity live sound.” Ratcliffe went with a pair of Danley SM-100F full-range loudspeakers with low-end support for the live venue and a pair of Danley CS-100 Cinema series loudspeakers for the classroom paired with a Danley THmini subwoofer.

“While we were there, Cooper [Hedden] let us hear prototypes of Tom Danley’s latest obsession: studio nearfield monitors,” Ratcliffe continued. “These were the Danley Studio 1s, which are passive boxes. They sounded absolutely incredible! Since we have so much gear in our racks already, I commented that I’d love to see the Danley monitors in a one-box powered format. The next day, Cooper called to say the challenge had been accepted. Tom Danley was going to build me an active version!” Now officially the Danley Studio 2, Tweed Recording has three sets. Two are in the mirror-imaged recording studios (almost exact replicas of the Oxford facility). The third set sits in the mix room.

“People should really pay attention to these Danley Studio monitors,” Ratcliffe said. “They’re going to make a serious dent in the studio monitor industry! We love them! Using Tom Danley’s creative genius, they rely on just a single driver and give a detailed picture of everything that’s happening in the mix. They have incredible depth, they’re incredibly smooth and we can monitor all day long and never feel fatigued. A good mix on the Danleys translates anywhere.”