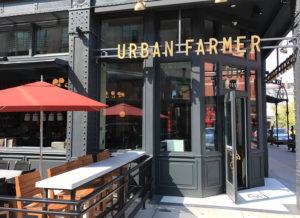 With unique locations in Portland, Cleveland, and Philadelphia, Urban Farmer Restaurant focuses on locally- and sustainably-grown food in a rustic, yet hip, atmosphere. Its owner, the Sage Restaurant Group, recently added a fourth location in Denver, Colorado. Located in the city’s historic lower Downtown neighborhood adjacent to the Oxford Hotel and a block east of Union Station, the Urban Farmer Restaurant Denver continues that tradition. Sage hired Interface Communications of Boulder, Colorado to design an impactful sound system that would respect the historic nature of the space, and Interface Communications relied on the tremendous fidelity and high-SPL output of some of Danley Sound Lab’s smallest boxes, the SH-mini and the TH-mini with their Synergy and Tapped Horn technology, to make good on that request.

“The big challenge at Urban Farmer Restaurant Denver was the historical nature of the building,” explained Mark Gwartney, A/V services manager at Interface Communications. “There are also hotel rooms above the space, so we had to do some very structurally-sensitive sound-proofing. As far as loudspeakers were concerned, the ceiling was off limits, making a traditional in-ceiling distributed system out of the question. Through our work with the Sage Restaurant Group at the Maven Hotel in Denver, we learned that they have very high standards for sound quality – many of their properties have live bands and the owner has a background in live sound!” High-quality sound spilling out of the open windows was also part of a deliberate strategy to draw passersby into the restaurant, given its prominent location and heavy foot traffic. 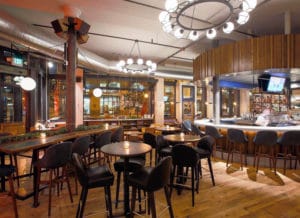 “When I think of high fidelity for something like this, I think of Danley’s clear voicing and musical toning,” Gwartney continued. “Standard 70-volt bandwidth wouldn’t cut it. At our first meeting, the restaurant manager, Troy Christian said, ‘take the standard system you might normally put into a restaurant like this and imagine how loud it could go – that’s my half-way point!’ But he wasn’t just thinking about volume, really; he knew that with more speakers, each could be run at a lower volume with better overall results. Another big challenge was that we had to be discrete about the aesthetic, so I needed really small boxes with high SPL that still sounded great. These days, Danley gets a lot of press for the giant, stadium-sized boxes they build – boxes a person could stand in! We had to go in the opposite direction, to their ‘mini’ loudspeakers and subs which fit the design perfectly.”

In all, sixteen Danley SH-mini loudspeakers (~ten-inch cube) and three Danley TH-mini subwoofers (24” x 15” x 24”) fill Urban Farmer Restaurant Denver with vibrant, well-articulated sound at any volume. Interface Communications technicians channeled their artistic sides to stain the visible boxes and added a vintage grill cloth so as to blend with the restaurant’s rustic interior. Crown amplifiers power the system, with BiAmp DSP. The BiAmp processor works with a Crestron/iPad control system to give restaurant managers complete control of the heavily-zoned system wirelessly. “The zone control is down to speaker pairs,” Gwartney said. “They can really tweak every little seating area to get the balance in the room exactly to their liking.”