WEATHERPROOF DANLEY OS-SERIES FOUND IN THE FOOTHILLS OF THE ROCKIES 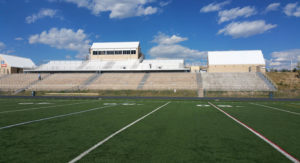 Douglas County High School in Castle Rock, Colorado is justifiably proud of its football team and co-ed cheerleading squad. The team won the Colorado 5A State Championship in 2005 and has come within striking distance of the championship in 2006, 2007, 2009, 2012, and 2013. Its co-ed cheerleading squad won the 4A-5A Varsity State Championship every year from 2007 to 2011 and was the runner-up in 2014. The squad even placed third in the nation in the National High School Cheerleading Championship in Orlando, Florida in 2012! So Friday nights in the fall are a big deal at DCHS, and they just became a slightly bigger deal with the adoption of an awesome Danley Sound Labs sound reinforcement system. Two fully-weatherized Danley OS-90 full-range loudspeakers and two fully-weatherized Danley OS-115 subwoofer powered by two Danley DLA7500 processor/amps give DCHS high-fidelity sound in rain, snow, or blazing heat. 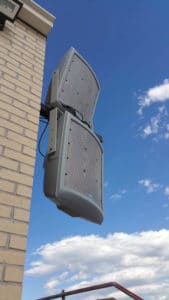 “Despite all of the excitement at Douglas County, their old sound system was pretty weak when it went in and only got worse over time,” said Jeff Brotherston, chief design engineer at AV Colorado, the company that designed and installed the new Danley system. “Intelligibility was poor, and support for music wasn’t really there. They were motivated to improve the system, but their budget was tight. We looked at their situation a couple of times from every angle, and one of the things that kept blowing the budget was a lack of poles on which to mount loudspeakers. We came up with the idea of mounting the Danley boxes directly on the press box. It was a little counterintuitive to place the loudspeakers behind the listeners, but it had the benefit of a nice, short distance between the loudspeakers and most listeners, plus minimal added cost to get them in the air.”

AV Colorado built custom rigging for the Danley OS-90s, which were mounted on opposite sides of the press box to cover both halves of the bleachers and field, and for the Danley OS-115 subwoofer, which was mounted below each OS-90 on the sides. “We could have used an off-the-shelf product, but it was more cost-effective to build our own,” said Brotherston. Together with the truly weatherproof Danley boxes, which are compact and low-profile, Douglas County’s new system is ready for anything.”

“We’ve worked with Danley products in the past,” he continued, “and we’ve been impressed by their approach. The OS-90 is neutral sounding, and its pattern control and power handling are excellent. We also received support from the engineers at Danley. They walked the field and modeled our solution in their Direct modeling software, which gave us added confidence that our solution was going to work well. And although Danley loudspeakers are not the cheapest loudspeakers on the market, they’re also not the most expensive loudspeakers on the market, especially considering the feature set.”

Mike Hedden of Danley adds, “Danley is a USA company and committed to making everything possible in America. We hear so much of the trade imbalance between the USA and China, yet the sirens of the cheap price have a strong voice. This project, like all Danley projects, is an example of how you can bring real value to a customer without contributing to the proliferation of Chinese made goods and the detriment of the U.S. economy.”

Two Danley DLA7500 amplifiers provide abundant power for the system, and Danley’s onboard DSP gives the OS-90s and the OS-115 exactly the loudspeaker conditioning they need. A BSS Blue100 provides routing logic and input processing. “Now that the new system is installed, the school is very happy and a bit surprised at just how loud it can get,” said Brotherston. “Intelligibility and sound quality went from terrible before the upgrade to fantastic. Now the tonality and balance sound great. We’ve covered the bleachers perfectly, and we’ve done a decent job of covering the entire field. We were one of the few vendors to come up with the idea of using the press box, and we’re proud it worked out so well.”