With Danley Loudspeakers, Subwoofers, and Amplifiers on Every Stage, New Orleans’ Ahava Festival Let’s NOLA Engineers Take Danley for a “Test Drive” and Raises Over $100,000 for Local Charities 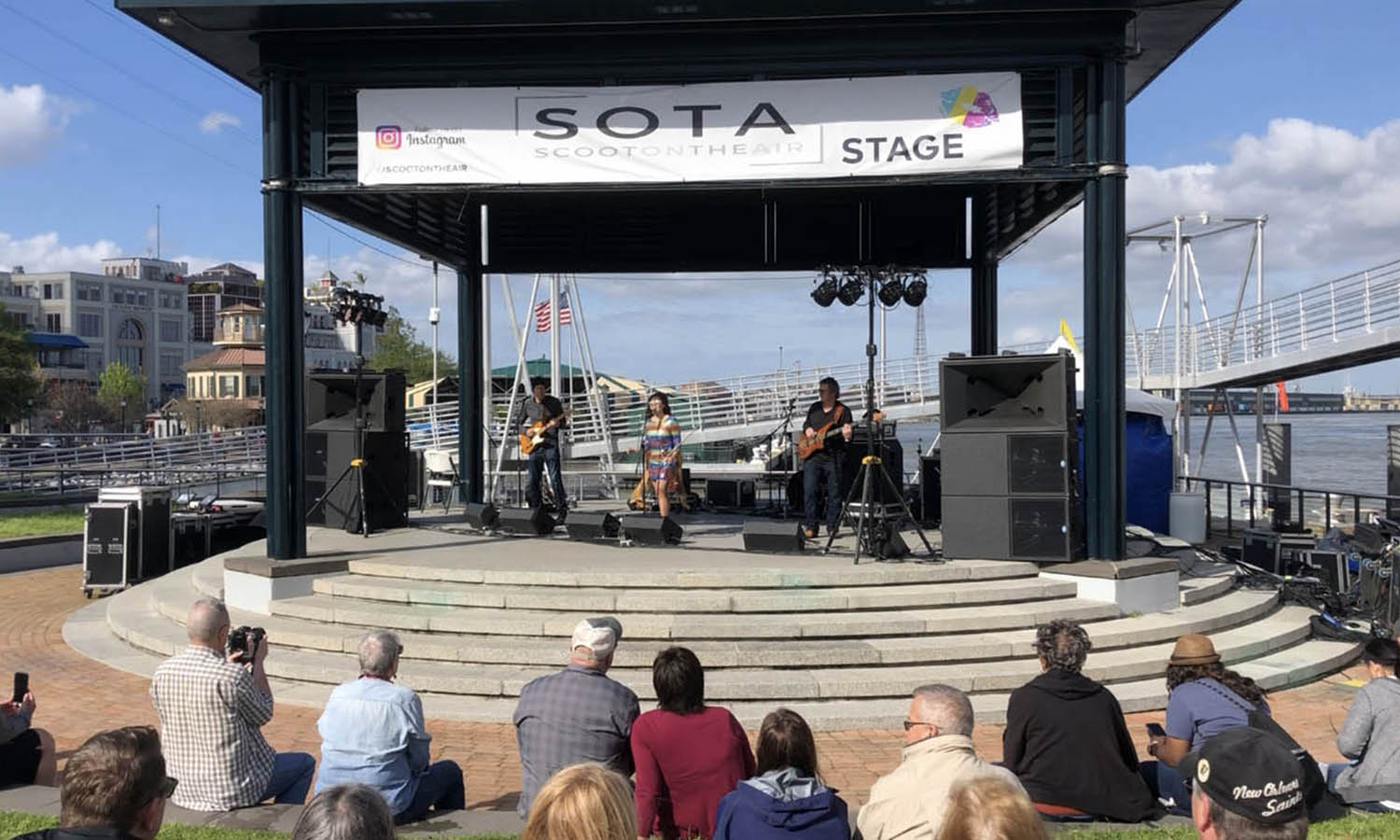 The Ahava Festival held its inaugural event at the Woldenberg Riverfront Park in New Orleans, Louisiana in early March. With no admission fee, attendees were encouraged to take in the sounds, sights, and tastes and, if possible, to donate to ten hard-working local charities. The weather was beautiful, and the event raised over $100,000! Danley Sound Labs supported the Ahava Festival with over 4,200 pounds of big-impact loudspeakers, subwoofers, and multi-channel amplifiers for all of its three stages, allowing New Orleans engineers to hear (and feel) the Danley difference.33

“The whole concept behind the Ahava Festival is based on sharing love and giving to the people in New Orleans who are in need,” explained Matt Dupuy, Ahava Festival technical director. Dupuy is a system designer and installation technician at local AV integration firm Assurance AV Solutions of Mandeville, Louisiana, as well as the FOH engineer for New Orleans’ party band favorite, Groovy 7 (who also played the main stage at Ahava). He coordinated with all of the different production companies and suppliers, including Danley, who came together to make the Ahava Festival a success.

Dupuy continued, “As an integrator, Danley is always our first suggestion to clients whenever possible. And I own Danley! Groovy 7’s main system is two SM80s and two TH118s. Danley has a level of clarity and a consistency in coverage that no one else can touch.” Given his enthusiasm for Danley and his desire to make the Ahava Festival the best it could be, Dupuy reached out to Kim Comeaux, Danley’s western regional sales manager, to see if Danley would be willing to supply the sound system for the charity event. Comeaux was happy to oblige. “At Danley, we believe in demonstrating the Danley experience,” Comeaux said. “The Ahava Festival provided an opportunity to exhibit different Danley solutions while supporting an important charity fundraiser.”

Ivan Beaver, chief engineer at Danley Sound Labs drove down from Georgia to assist with the event and, more importantly, to chat with the many local live sound engineers who used the system. “Here’s the deal,” Beaver said. “What Danley is claiming goes against everything that live audio professionals believe. Sure, we can talk numbers, we can talk specs, we can talk blah blah blah, but when you hear it, that’s when you become a believer. Engineers at Ahava commented that it was way easier to get a great sounding mix. They didn’t have to work as hard against the system. Similarly, they noted that even small moves – a dB of gain or boost on an EQ band or the fader itself – were obvious. You have to experience it for yourself. There’s no substitute.”

The Ahava Festival used three stages stretched across a quarter mile of the Mississippi River in Woldenberg Riverfront Park: a big, central “Seruntine” main stage, a smaller “SOTA” gazebo stage, and a smaller “420 Gospel Tent” stage. The Seruntine main stage used a flown Danley J7-95 loudspeaker per side sonically supported from below by two Danley BC415 subwoofers per side. Two smaller Danley SM80s provided front fill. Those eight Danley boxes total did the work of a massive line array system, and they did it with far greater clarity and uniformity – and without a line array’s problematic comb filtering. Four Danley DNA 20k4 Pro amplifiers power the system with 80,000 combined Watts and sixteen amplifier channels of which fourteen channels were used. The SOTA gazebo stage used a Danley SH96HO stacked on top of two Danley TH118XL subwoofers per side powered by two Danley DNA 20k4 Pro amplifiers. Finally, the gospel stage used Dupuy’s Danley SM100s, along with two Danley TH115 subwoofers and a Danley DNA 10k4 Pro amplifier. All of the Danley DNA amplifiers used on-board DSP with model-specific presets.

“I was really blown away that Danley was so willing and eager to do this for us,” Dupuy said. “No one else is willing to send us $150k worth of gear to run for the weekend! What they’re willing to do not just for their customers, but for potential customers, is amazing. With Assurance AV Solutions, Danley customer service helps us arrange demos all the time. The Danley demos always seal the deal. The Danley difference is obvious. At the Ahava Festival, the Danley boxes helped us knock it out of the park. That’s saying something, because Louisiana has over 150 registered festivals. I had a bunch of people come up to me to say Ahava was the best-sounding festival they had ever been to!”