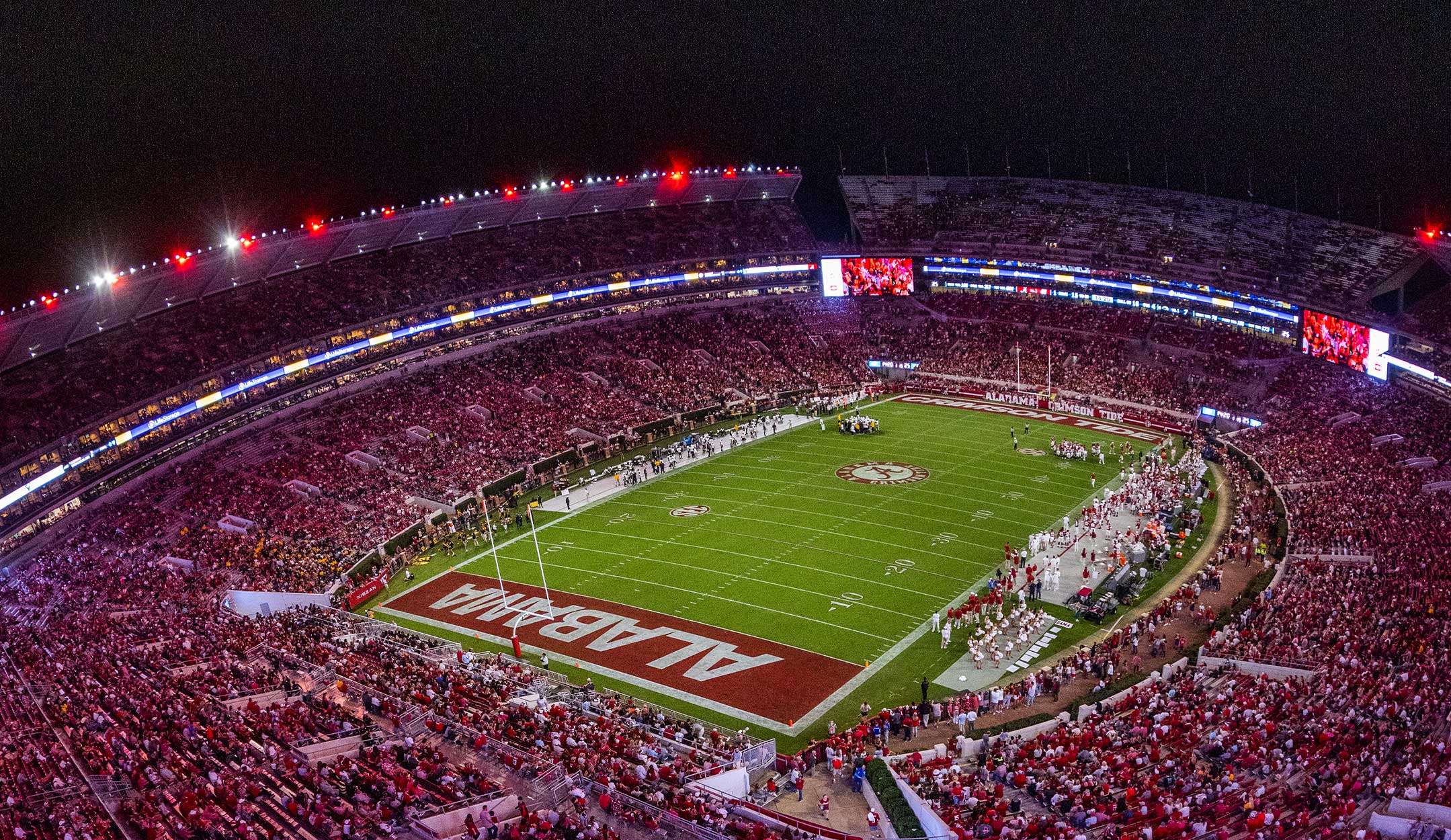 In the December / January 2021-22 issue of Mondo Stadia, Danley’s recent upgrade to the lower bowl of Bryant-Denny Stadium was featured. To read from the magazine, click the link below starting on page 40. We’ve also republished the article’s content below.

“I think they can hear this music in the blimp,” said Chris Fowler, ESPN analyst, during the live broadcast of the University of Alabama and Louisiana State University (LSU) college football game on November 6, 2021. “They did not put in cheap speakers when they redid [the stadium].”

“Game ops has never been a bigger deal in college football or in sports than right now,” said Kirk Herbstreit. “If you’re looking to visit, visit this stadium and come listen to a seminar on game ops. They’ve got it figured out here.”

Fowler added, “they make the experience fun for the fans. A lot of times, [the university] relies on the brand, but now the fans want a show.”

During the broadcast, Fowler and Herbstreit were referring to Bryant-Denny Stadium, the University of Alabama’s outdoor stadium, home of the Alabama Crimson Tide football team and host to over 100,000 college football fans on any given Saturday in the fall.

Just 36 days earlier, Danley Sound Labs commissioned 24 J7-95 Danley loudspeakers and 12 BC218 subwoofers in the stadium’s lower bowl seating area. This new installation replaced the all Danley system in the lower bowl and compliments the existing all Danley system in the upper bowl and in use for the stadium’s on-field sound needs. In addition, the sound system for the Walk of Champions at the north end of the stadium was also upgraded. As the team enters 2 hours prior to the game, they’re treated with the sound of a J7-95 loudspeaker and 2 BC215 subwoofers.

Over the past 3 years, the University of Alabama’s athletic department has spent over $100 million in renovations to Bryant-Denny Stadium. While stadium upgrades are a constant in college football, these renovations were substantial. These upgrades included replacing the existing video boards with larger screens, a new elevator bank on the west side of the stadium, reconfiguration of the Alabama locker room, expansion of the recruiting room and an additional 10,000-square foot social area. The press box was also relocated to the east side of the stadium and replaced with new luxury suites. The new lower bowl sound system has also been added, but Bryant-Denny’s relationship with Danley Sound Labs has been longstanding.

“15 years ago, we were using a portable rig for field coverage,” said Harold Sexton, customer relations manager of sports for Danley Sound Labs and former director of athletic event technology at the University of Alabama. “I was at Alabama at the time, and we were moving these portable rigs out for the team’s during pre-game. We couldn’t get the rigs out in time for pre-game which was always a problem. A friend had recommended Danley following an installation of a Danley system in their church, and we scheduled a demo. During the demo, they brought just one box and it covered the whole playing surface – only 3dB down on the opposite field’s endzone. It blew my mind – that’s when I fell in love with Danley,” said Sexton.

Since that initial on-field coverage system was installed – comprised of a single Danley GH60 loudspeaker paired with a TH212 subwoofer – the University’s sound needs continued to grow.

“In the initial full install back in 2014, time was of the essence,” said Mike Hedden, chief steward in charge at Danley Sound Labs. “There was a short time window to complete the installation and we were actively working on building speakers for another major install at Churchill Downs – home of the Kentucky Derby.”

Partially because Danley builds all of their loudspeakers and subwoofers in the United States, they were able to meet both deadlines simultaneously – producing 400 to 500 loudspeakers in just four weeks. 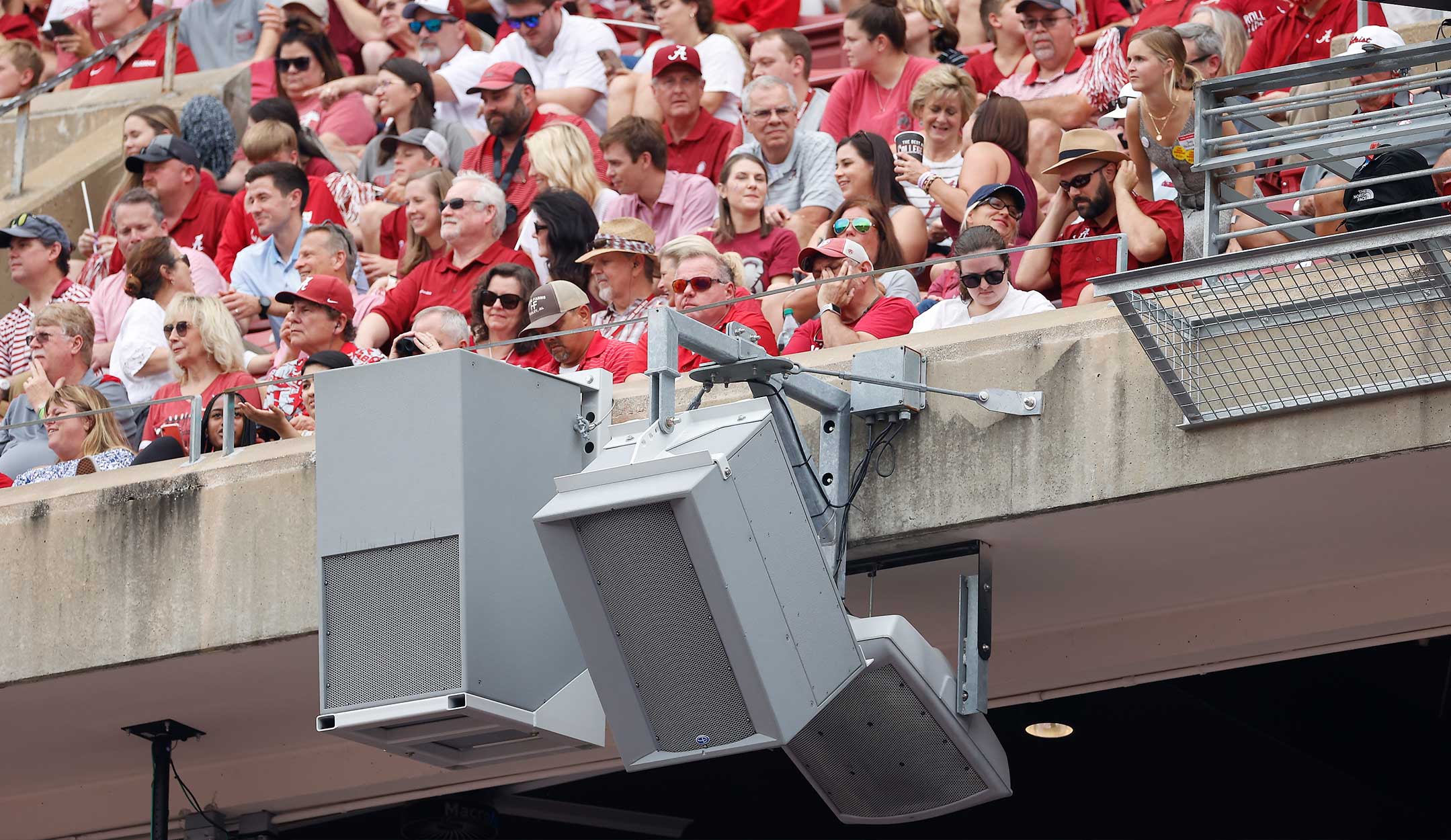 Bryant-Denny Stadium’s upper bowl continues to use forty distributed OS80 weatherproof loudspeakers (two at each of 20 locations), with every other OS80 cluster paired with a Danley OS115LF weatherproof subwoofer for low-end support.

“In the initial install, we were able to reduce total weight by several tons and our system required 52 fewer amplifiers and signal processing than the prior system,” said Hedden. “The new lower bowl installation uses even fewer speakers and adds low-end.”

“With the upgrades to the lower bowl, we added 12 BC218 subwoofers which weren’t present in the initial install,” said Cooper Hedden, southeastern regional sales manager for Danley Sound Labs. “Because of the back reflection in the new luxury suites, we had to be really careful to not add too much low-end and create too much reflection in the suites.”

Even with these minor limitations, the upgrades have made a significant difference.

“It’s always great for our staff to be recognized for their work,” said Rand Harris, associate athletics director of information technology at the University of Alabama. “Over the past few years, we’ve worked diligently to ensure that our alumni, faculty, staff, students and fans all have the best experience possible. The new Danley Sound Labs installation is certainly a meaningful part of that improved fan experience.”